The College of Engineering and Department of Theatre came together to construct a revolve for the upcoming Mamma Mia! production.

When preparing for the upcoming fall production of Mamma Mia!, Andy Bleiler, an assistant professor in the Lipscomb Department of Theatre and the production manager and scenic designer for the program’s shows, thought back eight years prior for inspiration.

In the fall of 2013, the theatre department put on a performance of Les Miserables which utilized a revolve, or a revolving stage apparatus, for scene changes or shifts in theatrical productions.

“We've got this really big class of new freshmen and a class of sophomores who've not done a show with us, which means we've got about 50 kids in the program right now that have never done a show where we had a revolve,” Bleiler said. “And so I thought, it's time. We might as well make a big splash.”

In 2013, the theatre department borrowed a revolve from the University of Memphis for the duration of the Les Miserables run. But in the time since, the College of Engineering had constructed a similar apparatus for the Department of Fashion and Design to use for galleries and shows. However, the construction had gone unused over the past few years.

When the theatre department drug it out of storage, the revolve needed some work. There were missing and broken parts. Bleiler contacted Fort Gwinn, the Associate Dean in the College of Engineering, who was one of the people who helped build the apparatus originally, alongside a handful of engineering students.

“We spent a week running back and forth between Stokes (where the revolve was located) and the Hughes Center trying to find all of the components to this thing,” Bleiler said. “And we finally did and we got some measurements on it and it looked like it was going to work for the show.”

But there was still one major step - they had to put the revolve back together, new parts and all, with no plans from the original project. The theatre department’s next calls were to Mark Chandler, a machinist who did a lot of the metalwork and machining for the gears on the original structure, and Chelsea Flowers (’13), the technical director for the theatre department. The trio worked alongside a group of theatre students in the hopes of fitting the puzzle together.

“Between all of our brains, we were able to sort of go, here's a plan,” Bleiler said. 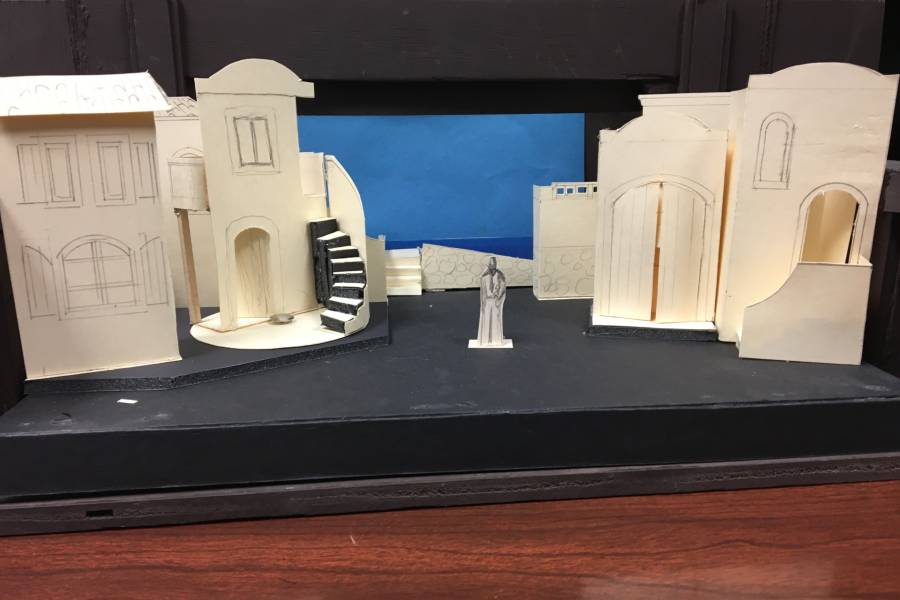 Model of the revolve

After figuring out how all the pieces fit together, the next step was to build the scenery that goes on the revolve. The theatre set practicum students played a large role in this process, which involved adding a set of curved stairs, a balcony, and several functioning windows.

“Our students are learning to work with steel and learning to weld, as well as the mechanics of making a revolve with a set on it that turns around,” Bleiler said.

The look of the revolve, and the set design in general, is inspired by the Greek villas featured prominently in both the Broadway production and the movie adaptation of Mamma Mia!, but unlike the movie version, they can’t actually travel to the physical location, so lots of work goes into making a passable replica. 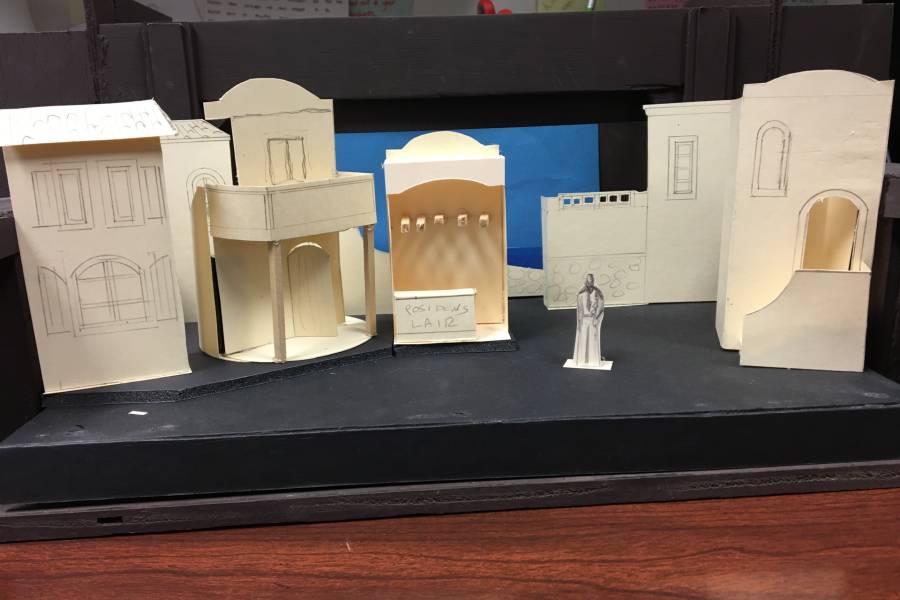 Model of the second position of the revolve

“I was trying to find ways on this limited stage to sort of create all of these worlds,” Bleiler said. “Everybody's familiar with the movie, which is shot on location in all of Greece. We can't do that. So instead, we're using the revolve and some of the other scenery that can move around to help change the stage a little bit, to make it more interesting as we tell the story.”

After an entire weekend of work from both engineering and theatre, the revolve is mostly in place. There are still a few kinks to work out, but Bleiler is confident it will be ready to go for Mamma Mia!’s debut.

“I think it's come to be a real asset,” Bleiler said. “I recognize that without their hunger to want to improve the engineering and find a better way to do everything and get their kids involved in kind of troubleshooting, and our knowledge of how to use a revolve in theater to change scenery and to create that wow effect, it wouldn’t have come together so beautifully.”

Bleiler says the successful cross-discipline collaboration between the two divisions has opened up the door for more dual projects down the road.

“I think it's really cool that we're doing this because it seems like it's sort of the mission right now, to find those interdisciplinary connections.”