Fred D. Gray is a quiet man. But don’t mistake that quiet demeanor for a lack of strong determination, will and fervent belief that young people can change the world.

The famed Civil Rights attorney has been at the forefront of changing the social fabric of America regarding desegregation, integration, constitutional law, racial discrimination in voting, housing, education, jury service, farm subsidies, medicine and ethics and generally in improving the national judicial system.

On July 7, Gray was recognized for a lifetime dedicated to serving others and working to make the world a better place as a recipient of the Presidential Medal of Freedom. He was one of 17 recipients selected in 2022 to receive this prestigious award and was recognized at a ceremony at the White House.

At 91 years of age, Gray is still making an impact.

One of those ways is through Lipscomb University’s Fred D. Gray Institute for Law, Justice & Society, housed in the College of Leadership & Public Service, which recognizes the impact that young people can have on society as it brings together individuals who have impacted society in the past to share their experiences with the next generation of students who will play key roles in their communities in the future.

In November 2016, Lipscomb officials named its program in honor of Gray to recognize his significant impact and to continue to inspire future generations to follow in his footsteps at a gala to celebrate Gray and the renaming of Lipscomb's Institute for Law, Justice & Society. Launched in spring 2007, the institute is based on the principle that legal change is one of the surest means to effect social change. Students are encouraged to consider America’s legal system from a multidisciplinary perspective to get a fuller understanding of its mechanisms, practice and consequences. 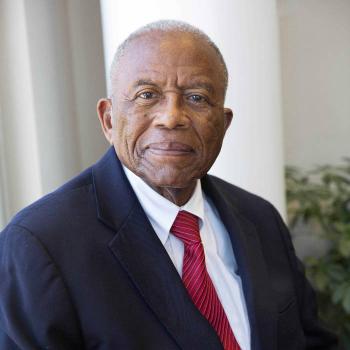 “The Gray Institute offers an undergraduate program that focuses on socio-legal issues to encourage critical thinking, good writing and a passion for justice,” said Randy Spivey, former Gray Institute academic director at the ceremony in 2016. “Dr. Gray is an inspiration to our students, and he is a living example of the impact one person can have. He has been instrumental in shaping the work we do here in the institute, and we are honored to be able to celebrate his body of work in this significant and lasting way.”

Today the Fred D. Gray Institute for Law, Justice & Society is home to a rigorous and challenging undergraduate academic program that is one of the few in the nation taught from a justice and civil change point of view. It is led by academic director Kimberly McCall and prepares students for law school, public policy or governmental work, and work with nonprofits. It is one of the only programs in the country that incorporates travel to Washington, D.C., and London in the course curriculum. Located in Nashville, Tennessee’s state capitol, students interact with federal and state legislators, lobbyists, attorneys and politicians. Many of the class sessions are taught by these accomplished individuals. Program graduates have a nearly 100 percent placement rate in law school or law-related professions.

At the 2016 celebration, Gray shared advice for young people who want to make a difference in the world around them.

“Preserving civil rights is so important,” said Gray to the audience. “The struggle continues for justice under the law. I'll be the first to tell you we have made a tremendous amount of progress made, but there is more to be done. We need all people of all races of all creeds of all colors of all religions to help solve the problems facing this country."

He encouraged the audience to “seek to instill in young people (wanting to pursue a legal career) that they have a life worth living and their dreams, too, can come true,” he said. “We must encourage young people to have an optimistic spirit, to seek help when needed, accept advice and never stop learning, never stop dreaming. Grab hold to a star and great things may happen.”

“I challenge us as we launch the Fred Gray Institute for Law, Justice & Society to help young people better be themselves so they will be successful in assisting and bringing about radical reconciliation, equality and justice for all regardless of race, creed and color. Help them assist this nation in bringing about equality and justice for all under the terms and conditions of our constitution and it conforms to the instructions left to us by Jesus Christ. I pledge to you that I will continue to fight for equal justice under the law until all of God’s children are truly free with deep humility, thank you for honoring not only me but my clients. I hope and pray that many young men and ladies will attend this institute at this university.”

Gray began his legal career as a sole practitioner and less than a year out of law school at age 24, he represented Rosa Parks after she refused to give up her seat on a city bus, which began the Montgomery Bus Boycott. Gray was also Martin Luther King Jr.’s first civil rights lawyer, represented the Freedom Riders and filed the lawsuits that desegregated Alabama schools.

A native of Montgomery, Ala., Gray is in the general practice of law specializing in civil rights litigation and lives in Tuskegee. He is the senior partner in the law firm of Gray, Langford, Sapp, McGowan, Gray, Gray & Nathanson P.C., with offices in Montgomery and Tuskegee.

He is admitted to practice in the United State Supreme Court as well as in the Supreme Courts of Ohio and Alabama among other local and district courts. Among his notable cases are City of Montgomery v. Rosa Parks, State of Alabama v. Martin Luther King Jr., Aurelia A. Browder, et al v. W.A. Gayle, et al (integrated the buses in the City of Montgomery), Williams v. Wallace (court ordered State of Alabama  to protect  marchers from Selma to Montgomery after being beaten on Bloody Sunday), and Lee v. Macon County Board of Education (integrated all state institutions of higher learning under the Alabama State Board of Education, and 104 of the then 121 elementary and secondary schools systems in the state). He was counsel in preserving and protecting the rights of persons involved in the infamous Tuskegee Syphilis Study in 1972, the case of Pollard, et al v. United States of America.

One of the first African Americans to serve in the Alabama Legislature since reconstruction, Gray was also the first African American elected as president of the Alabama State Bar Association in 2002. He also served as the 43rd president of the National Bar Association and is a fellow of the American Bar Foundation, American College of Trial Lawyers and International Society of Barristers. Gray is the recipient of numerous awards including the Charles Hamilton Houston Medallion of Merit from the Washington Bar Association, Harvard University Law School’s Charles Hamilton Houston Medallion; the American Bar Association’s Thurgood Marshall Award and the Federal Bar Association’s Sarah T. Hughes Civil Rights Award.

Gray is the principal founder of the Tuskegee Human and Civil Rights Multicultural Center, which serves as a memorial to the participants of the Tuskegee Syphilis Study, a group Gray also represented in court,  and educates the public on the contributions made in the fields of human and civil rights by Native Americans, Americans of African descent and Americans of European descent.