‘Your brother's blood cries out to me from the ground’

Few high schoolers these days get a chance to step through a window in time and meet someone who has personally shaped the life they live today.

Kaya Coleman is one of the few. As a high school senior in Birmingham, Alabama, she was accepted into Lipscomb’s ENGAGE Youth Theology Initiative and in 2018 found herself talking to and learning from a man who personally impacted her life.

In its four years of existence, as part of its 10-day exploration of Scripture, theology, Christian leadership and public service, ENGAGE has taken 58 high school students on a three-day civil rights pilgrimage to various sites in Alabama, including to the Tuskegee Human and Civil Multicultural Center, founded by Dr. Fred D. Gray, an African-American attorney who served as Dr. Martin Luther King Jr.’s personal attorney and—most relevant to Coleman, now a rising senior at Lipscomb—who brought the case that resulted in the desegregation of Alabama’s schools. 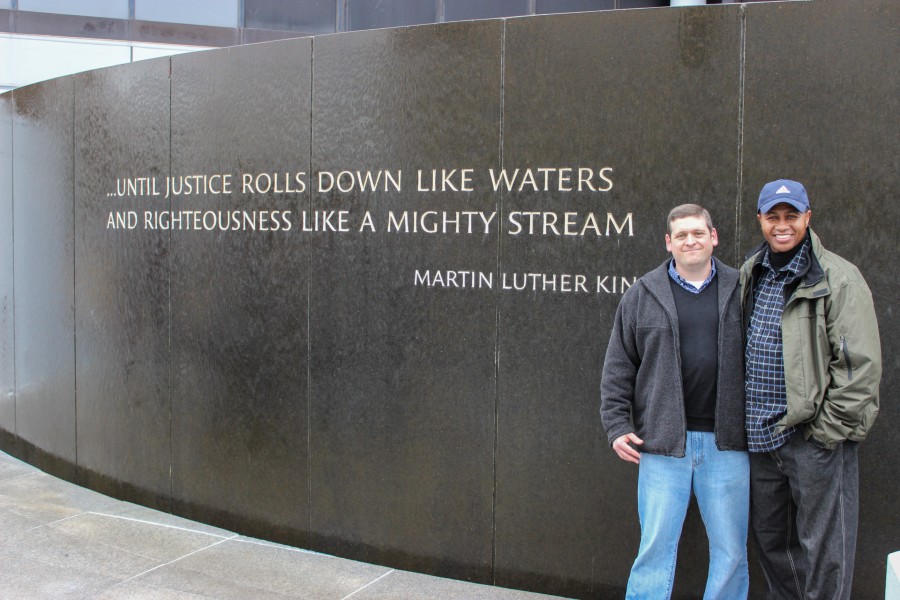 Derrick Jackson (D.Min. ’17) with a fellow Lipscomb student at a Montgomery, Alabama, memorial.

“Dr. Gray is truly a living legend,” said Claire Frederick, faculty fellow and ENGAGE program director. “For decades, he’s used the law to transform society and bring justice to his community. For our students who get to hear his story in person, he impresses upon each that his legal work during the civil rights movement was Gospel work. They walk away knowing that in their lives today, justice work is Gospel work.”

A personal meeting with Gray is just one aspect of ENGAGE, a Lilly Endowment-funded summer program for high school students interested in the intersection of theology and social issues; and ENGAGE is just one aspect of a years-long focus by College of Bible & Ministry faculty to move the university and the Christian community toward racial unity and healing.

From a youth ministry conference on racial reconciliation to local Churches of Christ participating in a civil rights bus trip, from faculty research and writings to nationally known scholars visiting campus, the college has consistently reached out to Christian constituencies across racial lines. 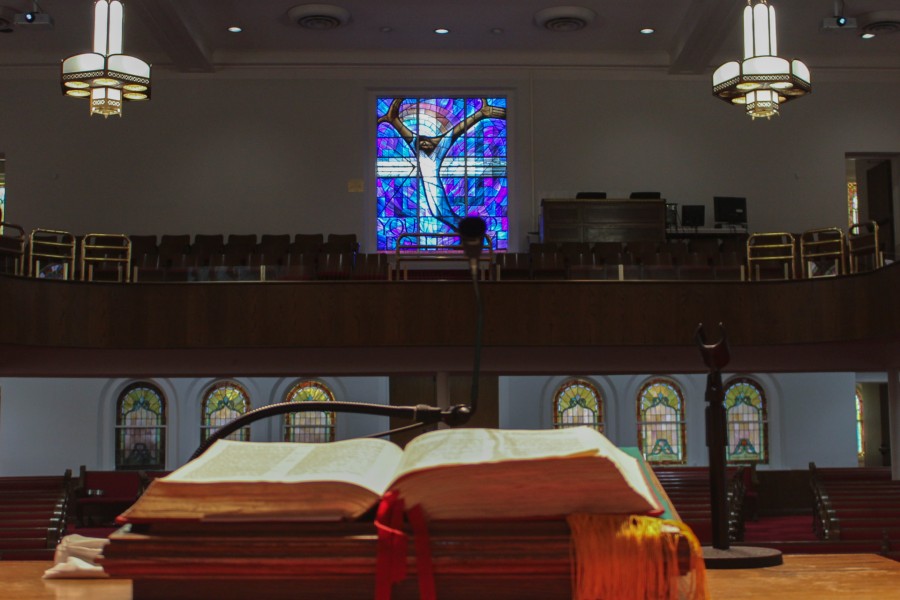 Birmingham's 16th Street Baptist Church that was bombed in 1963.

The seeds of the college’s focus on racial unity have been sown for many years, but one of the key moments in the evolution of the college’s current effort came in 2010, when Professor David Fleer, then a relatively new faculty member at Lipscomb, signed up for a bus tour of Alabama’s civil rights historic sites coordinated by Nashville’s Schrader Lane Church of Christ.

Not only was the experience thought-provoking and self-reflective for him, but it revealed to him how easily and affordably such an experience could be provided to others, he said. He began coordinating such experiences for local churches, Lipscomb faculty and various interested groups.

A decade later, hundreds of individuals have participated in the journey; it was incorporated into the college’s then-new D.Min. program in 2012; and it is the tentpole experience for the ENGAGE participants. Each tour includes a stop at the Tuskegee center and a chance to meet Gray, who became a close friend to Lipscomb in 2012, lending his name to the Fred D. Gray Institute of Law, Justice & Society.

“I wanted this tour to be a pilgrimage. With every year, it becomes more and more pertinent,” said Fleer, noting how national tragedies within the past decade, and particularly since May 2020, have brought renewed awareness of racial inequality in America.

Derrick Jackson (D.Min. ’17), pastor of the First Baptist Church in Gallatin and an adjunct professor in the college, first attended the civil rights tour as a doctoral student and was so inspired by that version of the civil rights experience, which includes more tour stops, rigorous academic readings, group discussions with guest experts and inspirational readings at the historic sites, that he designed his final project to bring together Baptist church leaders and Church of Christ congregation leaders on the trip together. Today he leads the D.Min. tour himself with Fleer.

“The topic of my project was ‘Does the leadership of our church even want to be bothered with racial reconciliation?’” said Jackson. “I felt that, anecdotally speaking, many people say, ‘Oh, we don’t want to worry about that.’ So at a minimum, there was value in just getting the story told and acknowledging that this is a major part of America’s story.

“Telling the truth for what it really is, and asking, ‘How do we, as Christ’s followers, actually embody Christ’s vision in a way that includes all of us,’” said Jackson. 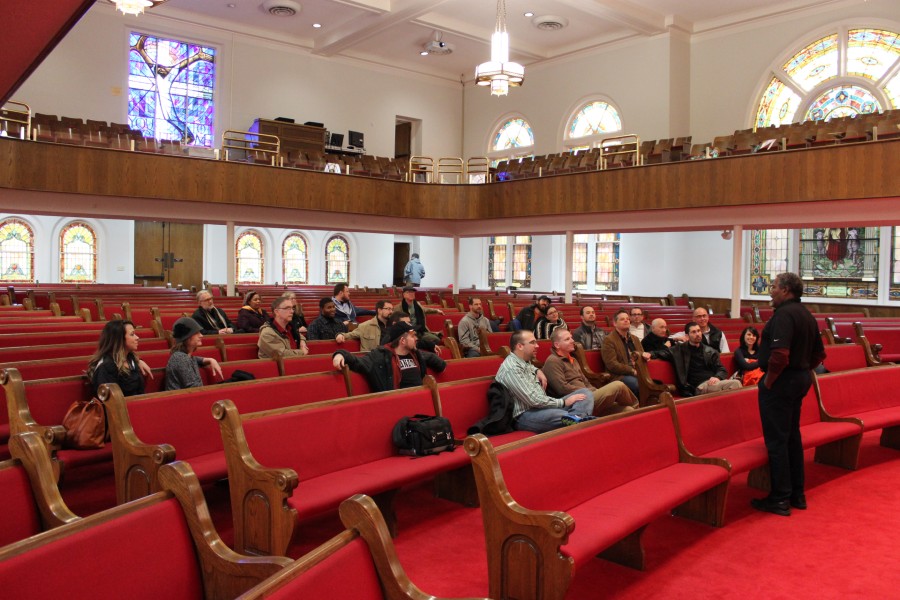 Doctorate students visit the 16th Street Baptist Church in Birmingham that was bombed in 1963.

The experience, which stops at sites such as the 16th Street Baptist church in Birmingham where four young African American girls were killed and the Dexter Street church in Montgomery where MLK pastored and was drafted to lead the historic bus boycott, is spoken of in glowing terms by former participants.

“It looks at what it means to be a human,” said one. “Transformational,” said another, and “the most unique educational enterprise I have experienced,” said a third. “This is not something that you can get in history books. Walking away from this, I will be so different,” said ENGAGE alumna and then-Lipscomb University junior Rylee Russell of McKinney, Texas.

The convenient, affordable nature of the journey has also proven valuable for community groups, Fleer said. One participating group was a Columbia, Tennessee-based group called Stand Together which included the city’s mayor, representatives from the police department, faith-based leaders and other community advocates. 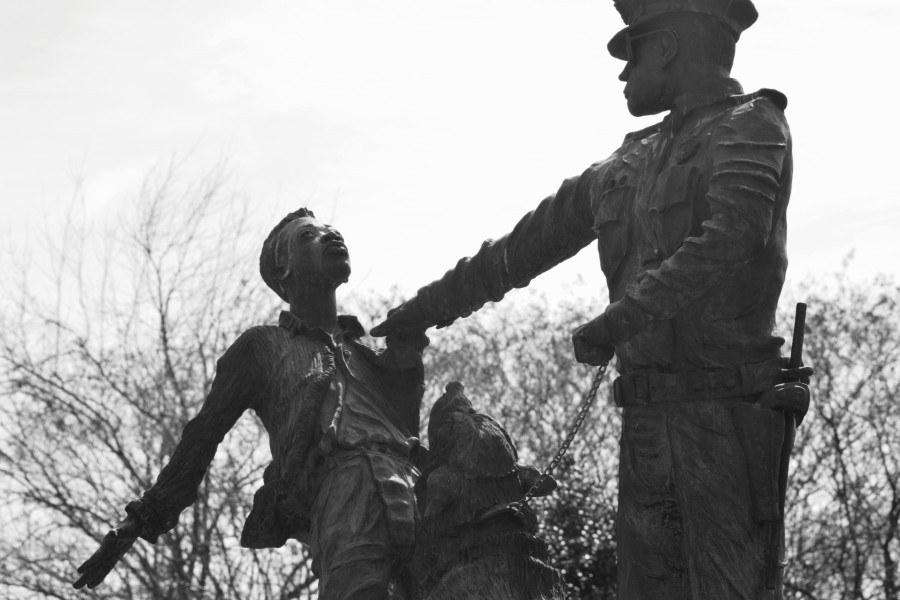 In addition to the civil rights tour and ENGAGE, the College of Bible & Ministry has launched a number of other racial justice initiatives over the years, including its 2017 annual conference for youth ministers focused on racism and racial reconciliation and a 2018 conversation series for selected faculty at five of Nashville’s historically black and white universities, facilitated by Richard Hughes, Lipscomb’s scholar-in-residence and author of the book Myths America Lives By: White Supremacy and the Stories That Give Us Meaning.

Hughes was awarded $12,500 in 2018 from the Lilly Fellows Program to host faculty from Lipscomb, Belmont, Trevecca and Fisk universities and American Baptist College, to discuss racial issues, white privilege and how to address those issues on college campuses. The participants shared their personal experiences with racial inequity, discussed topics using Hughes’ Myths book as a framework and discussed actions taking place on the various campuses.

Lipscomb used the same format in spring 2021 to host conversations on race with student leaders from the same universities, culminate with the June opportunity to hear an on-campus talk by a national expert on antiracism. 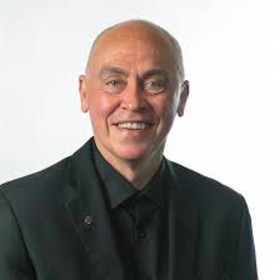 In 2012, the Christian Scholars’ Conference (CSC), an academic conference for theologians and Christian scholars directed by Fleer, awarded Gray an honorary doctorate from Lipscomb, and in 2016, it established the Fred D. Gray Plenary Lecture in Human and Civil Rights, which over the years has featured Gray himself, James H. Cone, Molefi Kete Asante and David Gushee.

“The civil rights section of the CSC is one of the most vibrant in all of the conference,” said Fleer. “Sessions often take theory or scholarly research and move these ideas toward healthy strategies of practice. In 2016, ACU Press published a dozen CSC papers in a collection entitled, Reconciliation Reconsidered. It was widely read among groups and individuals as a model of some of our best thinking and a foundation for racial healing.”

Hughes’ work Myths, revised in 2017 to include what he calls “the most important of all American myths: the myth of White supremacy,” has also proven influential.

“Myths America Lives By has been one of our top sellers since the second edition was published in September 2018,” said Michael Roux, marketing and sales manager of University of Illinois Press. “It is taught in higher education classrooms around the United States and has experienced a large increase in sales on Amazon since the George Floyd inspired protests centered white supremacy in the national conversation.” 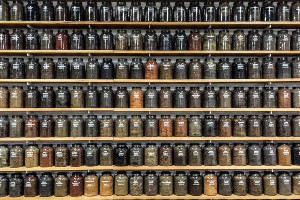 Students visit the Equal Justice Initiative's Legacy Museum which exhibits a collection of soil from lynching sites across the U.S.

With the focus of the nation turned once again to racial inequality following the tumultuous events of 2020, it has become apparent just how much thought-provoking efforts like those of the College of Bible & Ministry are truly needed in America.

As one ENGAGE student noted on the civil rights tour upon first sight of the Equal Justice Initiative’s Legacy Museum exhibit featuring soil samples from the sites of over 4,000 lynchings in the U.S., “It felt like the wall was screaming at me.”

Immediately, students connected the sight of the soil, Frederick said, to these words from the Bible: “And the LORD said, ‘What have you done? Listen! Your brother's blood cries out to me from the ground’.” (Genesis 4:10).