Lipscomb has seen 14 of their graduates make a mark in their community by establishing an independent pharmacy.

In a retail world full of big-box stores and online merchants, it’s not common to see the neighborhood-based, community pharmacy spring up very often. Lipscomb’s College of Pharmacy, however, has seen 14 of its graduates strike out and start their own independently owned pharmacies in the past decade.

This issue of The Script continues a series highlighting several of these intrepid entrepreneurs. Jennie (’15) and Kelby Sutton (’14) and Heather Hollingsworth Knight (’12) have each headed back home to open pharmacies in their hometown communities of Pulaski, Tennessee, and Hamilton, Alabama, respectively.

A marriage made at Lipscomb brings personal care to Pulaski

The Sutton Family Pharmacy, opened in March 2019, in Pulaski, Tennessee, was in the making just a few months, but the couple who started it were in the making long before that.

Jennie and Kelby Sutton were a couple back in their community college days, when Kelby proposed over the Bunsen burner in the chemistry lab at Columbia State Community College. They both moved on to study pharmacy at Lipscomb and married during Jennie’s second year of pharmacy studies.

Kelby Sutton, a Pulaski, Tennessee, native waffled between engineering and pharmacy for a time, but his work study job in the chemistry lab at Columbia State and a job in a Kroger pharmacy working for his chemistry professor’s son made up his mind to pursue pharmacy. And since that decision, Kelby said he has always wanted to open a pharmacy in his hometown.

He had the perfect partner in Jennie, who started working in an independent pharmacy in Lewisburg, Tennessee, in her senior year of high school. In between birthing and raising two children, both Jennie and Kelby worked at various independent pharmacies during their pharmacy studies and after graduation. 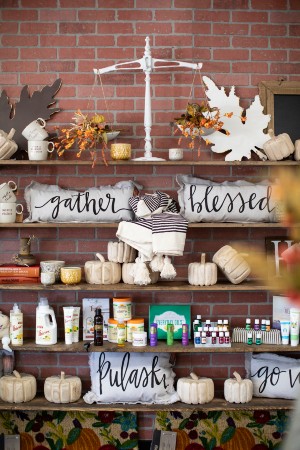 Kelby knew his hometown had always supported five pharmacies, so when Fred’s Inc., a troubled retail chain that operated pharmacies throughout the Southeast, announced it was selling out its Pulaski location to Walgreens, he knew the time was ripe for the Suttons to fill the gap.

Many of the former Fred’s customers moved over to Sutton because “it’s about the way we take care of people,” said Kelby. “This is about being able to take care of people the way you want to rather than having someone else tell you what to do,”

“Ninety percent of the providers in town are listed on my phone,” said Kelby, who also has known many of his customers throughout his life.

The residents in that kind of town gravitate toward personal pharmacy services provided by someone they know, Kelby said. The Suttons greet their customers by name and have close enough relationships to remember details about customer’s home lives, Jennie says.

“We wanted to provide care that customers don’t always get from other places,” said Jennie. “No one leaves here feeling like we haven’t genuinely cared for them, and if they do, we’ve missed our mark.”

Sutton Family Pharmacy offers drug delivery, medication management, health assessments and natural medicine consultations, an increasingly popular product in the retail business. Like many other independent pharmacies, they also offer an array of home décor, gifts, baby clothes and over-the-counter products, all in a rustic setting with corrugated metal and brick walls.

The Suttons say their business plan from their community pharmacy course at Lipscomb, taught by Ray Marcrom, helped them get started on their business, and consulting with the other Lipscomb alumni entrepreneurs helped shape their style aesthetic for their non-pharmaceutical retail goods.

While many may think that a married couple working together could cause problems, the couple say they have never had any trouble working together. In fact, Jennie says their differing approaches to patient care provide less opportunities for missed care.

Hamilton Pharmacy is a community, as well as health, advocate

Heather Hollingsworth Knight, who grew up the daughter of the Marion County Schools Superintendent, has used her Hamilton Pharmacy to not only provide excellent patient care for her neighbors, but to promote civic pride in her hometown community of Hamilton, Alabama.

When considering the design of her pharmacy, which she built and opened in 2017, she and her partners came up with the idea of creating a word map in the shape of Alabama. They created a long list of locations and businesses related to the Hamilton of today and yesterday, such as Coleman’s BBQ, Buttahatchee River Fall Festival, Dinelli’s Pizza and Hamilton High School.
The wall décor has proven so popular that she has now created T-shirts, which are selling well, with the same design.

Beyond that simple act, Knight’s business makes itself part of the community by sponsoring the local high school sports team, offering a line of children’s toys and a bridal registry for the high-end gifts she sells, items that are not easily found close by elsewhere. 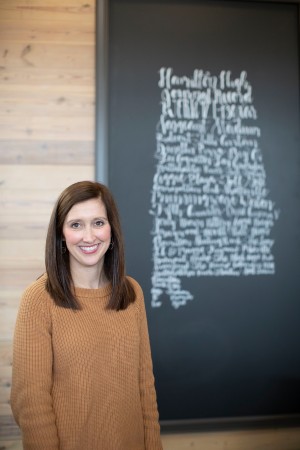 Her Alabama "word map" has proven so popular that she has now created T-shirts with the same design.

Knight, a member of Lipscomb’s inaugural pharmacy cohort, became a consulting pharmacist living in Muscle Shoals, Alabama, and then Hamilton after graduation as she started her family. After growing weary of juggling driving far away to jobs and raising her kids, Knight decided to purchase an available lot in Hamilton and build the free-standing Hamilton Pharmacy.

She had plenty of help from her husband Tyler Knight, who has a design background and built all the cabinetry, and her cousin, Jonathan Shaw, a pharmacist who became her partner in the venture.

“You don’t go into it lightly. But it’s been rewarding in many ways,” said Knight, who says local customers always recognize her once they learn her maiden name. “Everyone knows my family!”
“I’ve worked for chains before, and that’s a great job, but I like having that personal relationship,” she said. “When people walk in, they know that you know their name.”

To build a successful business you have to “find your niche,” said Knight, who said she chose to carry Melissa and Doug toys because she knew local mothers like herself would appreciate a convenient outlet for educational toys.

She also credits Marcrom’s community pharmacy course as a source of concepts she uses to operate her business today. “It helped me see where pharmacy was headed,” she said of the course. “It gave me a vision of what I could  do (in the future).”