Looking to the past to discover new insight into Christianity

And now behold, the hand of the Lord is upon you and you will be blind and unable to see the sun for a time” Immediately mist and darkness fell upon him and he went about seeking people to lead him by the hand.

When Barnabas and Paul traveled to the island of Cyprus during their missionary journeys, they encountered Elymas, the magician. Because of his opposition to their spreading the Gospel, Paul struck Elymus blind.

A story that takes up just a few Biblical verses for Christians to read today, had far more impact on the Cypriots at that time as magicians on Cyprus often tried to use blindness to stop people from speaking. Paul was showing the power of Jesus by reversing this curse that was most likely said against him.

Christians today can learn from these snapshots of life in Biblical times, thanks to the ongoing work of archaeologists, including those at Lipscomb University’s Lanier Center for Archaeology, which houses doctoral and master’s programs in archaeology of biblical times and the Near East. 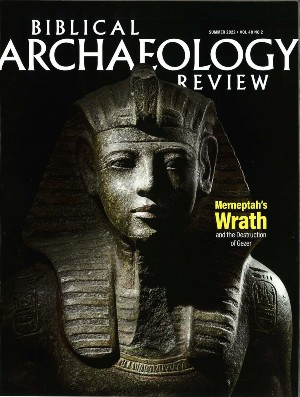 A recent cover article in this academic journal featured finds and analysis by Dr. Steven Ortiz from the Tel Gezer excavation site in Israel.

Formerly housed at Southwestern Baptist Theological Seminary in Texas before moving to Lipscomb in mid-2020, the Lanier Center, is led by internationally renowned archaeology scholars Dr. Steve Ortiz and Dr. Tom Davis. With enrollment of 21 students anticipated for this fall, the competitive Ph.D. program is believed to be the largest program focused on Near East archaeology in the nation, says Davis.

Ortiz’ and Davis’ scholarly work has not only been published widely throughout the field, it also contributed to the ESV Archaeology Study Bible. Most recently Ortiz was published as the cover story of Biblical Archaeology Review. The article describes finds at the Tel Gezer excavation site in Israel, where Lanier teams have dug for the past 10 years.

The first LCA excavation since moving to Lipscomb is the Kourion Urban Space Project (KUSP), a multinational effort in the Republic of Cyprus seeking to better understand the transitional period of the 4th century AD when Christianity replaced the traditional Roman religion, paganism, as the dominant religion of the island. Davis, associate director of the Lanier Center, is the principal investigator on the project and Grimsley serves as the field director. Eleven students contributed to a 20-person team that went on the Kourion dig in May.

Kourion is of particular interest because a series of earthquakes in the 4th century served as a catalyst for the shift from paganism to Christianity, and because disasters with no warning provide an “exact moment in time and in archaeology you rarely get to see that,” said Davis.

“We know what they were eating, where they were storing their material, how they set up their kitchen. This exact moment was captured, the morning that the quake hit, because they never came back to disturb it,” he said.

Davis first worked at the site as a graduate student in the 1980s. The experience of his excavation team was documented by National Geographic in a story about the excavated bones of two adults and an infant child killed in the earthquake. The male wore a ring inscribed with “Chi Rho, ” the first two greek letters in the term “Christ”; an alpha and an omega representing the first and the last letters flank the symbol. That indicates this is a Christian sign.

“That ring shows us that before the churches were built there were Christians in the community who were not afraid to show their identity, to show their faith,” Davis said.

“In the early 4th century AD, Kourion was a vibrant Greco-Roman city containing a civic center, bathhouse, theater, stadium and a large pagan religious complex dedicated to the deity Apollo Hylates but had no public church buildings,” said Grimsley. Then the earthquakes hit. “Included in this destruction was the pagan temple of Apollo. During the rebuilding of Kourion the inhabitants did not repair or rebuild Apollo’s temple, instead they began to build churches.”

“Paganism has no answer for why quakes occur: ‘It is the judgment of the gods.’ Christianity has an answer: it’s both judgment, but it’s a mercy. It’s a gateway for a Christian family. In the 4th century, they didn’t fear death in the same way we do.  They saw this as: ‘Ok, I’m now in the presence of Christ’… they had a faith answer to why death happens and why destruction occurs.” 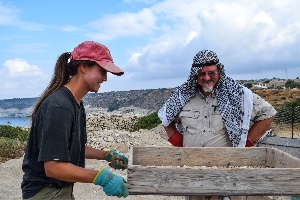 PH.D STUDENT KATHERINE HESLER, SIFTS THE SOIL ALONG WITH DR. TOM DAVIS, A DIRECTOR OF THE KOURION URBAN SPACE PROJECT, A MULTINATIONAL PROJECT IN CYPRUS

As the only foreign university to hold a dig permit in Kourion, Lanier Center archaeologists began digging at Kourion in 2012 in hopes of learning how the social and ideological changes impacted daily life for the elite and the non-elite, how the city was structured pre- and post-earthquake, what new contributions Kourion could make to the field of disaster archaeology and how the process of rebuilding the city reflected the social fabric before and after the disaster.

The Lanier Center dig has uncovered a well-preserved structure: a large two-story upper-class home that collapsed in on itself preserving many of the artifacts of the home as a result of the earthquake, said Grimsley. The excavation has uncovered numerous coins, a glass plate imported from Egypt, sculpture fragments, painted plaster and mosaic floors among other findings, he said.

These finds have fueled several Lanier students’ research projects so far, said Davis, including one on how glass and light is viewed in the ancient world, a study of mosaic floors in churches compared to secular buildings of the time and one about how rubble from previous destruction was used to rebuild buildings.

The site has the potential to make a real contribution to earthquake science, said Davis, adding to knowledge of how the buildings themselves were destroyed and how the earthquake affected the decay of the structures over time and archaeological site formation.

In addition, the skeletal remains of four individuals who were trapped and crushed by falling wall blocks from the earthquakes were found huddled together in one of the rooms.

Currently, Grimsley is part of a team planning ways to implement the field methodology, how to excavate and how to collect material.

Preliminary reports on the discoveries unearthed at the Kourion site have been reported to the Cypriat Department of Antiquities and are pending publication, and some articles drawing from Kourion data have been published in European journals including the Journal of Archaeological Science, Buried History and Cahiers du Centre d’Etudes Chypriotes.

“The only place where we will ever learn anything about the Bible that’s new is through archaeology,” said Davis, “and that’s why it is fundamentally important for a Christian university.”

In the 2021-22 school year, the Lanier Center had 19 doctoral students and four master’s level students enrolled, said Marcella Barbosa, curator and collections manager. Doctoral students are expected, and master's students are highly encouraged, to participate in excavations every year. Something made practical and accessible for Lipscomb students as the Lanier Center  administrates six of its own excavation sites, a luxury many other programs do not have, said Barbosa.

Lipscomb students are able to participate in excavations in Israel at the Tel Burna excavation site, where Ortiz serves as co-director, through a partnership with Ariel University . The same partnership allows students to work firsthand at the ongoing recordation project of the West Wall of the Cour de la Cachette in the Temple of Karnak, Luxor, Egypt, where Dr. Mark Janzen, associate professor, and Egyptologist, serves as a project coordinator.

In addition to the Kourion site, the Lanier Center leads projects with the Nuri Pyramids Expedition in Sudan and the Ilibalyk Expedition in Kazakhstan.

Next year, Lipscomb students will be able to join the Abila Archaeological Project on the Jordan/Syrian border. Dr. Dave Vila of John Brown University invited the Lanier Center to excavate the Abila site which will provide insight into the region’s transition from Roman Christianity to Islam, said Davis.

The Lanier Center boasts a collection of about 1,100 artifacts and a collection of sherds, a fragment of a pottery vessel found on archaeological sites, numbering in the thousands, said Barbosa.

“As Christians we believe our faith is grounded in real historical real events,” says Grimsley. “I think it's important for us to understand the context in which these events took place. Doing so helps us to ground our faith historically and helps us connect with Scripture. It helps us understand the history behind Christianity and how God works through the world.”