Clean water improves health and opportunities, thanks to Lipscomb students and Garney managers.

In the United States, the privilege of clean running water is one we often don’t give much thought to. Our expansive water system is often taken for granted, and so are its designers.

In Los Limones, Guatemala, fresh drinking water is never taken for granted. In good times, it comes from two places — off the roofs of its homes or from a tiny spring within the village. However, when dry seasons arrive or accessible water becomes contaminated, neither of these sources can support the people. For the sake of their livelihood, women and children of Los Limones walk over an hour a day to bring back safe drinking water, carrying it on their heads.

“How do you bring a consistent, safe source of water to a remote village of a thousand people?” is the critical question that got Garney Construction’s Jeff Seal and InFlo Design Group’s Kevin Colvett talking one day.

Colvett and Seal, both Nashville-based, have worked together on various water projects, and Colvett has worked with Steve Sherman, executive director of Lipscomb’s Peugeot Center for Engineering Services in Developing Countries through their shared congregation, Nashville’s Otter Creek Church of Christ.

All three have been involved in bringing life-changing water projects to disadvantaged areas of the world in one way or another. These three came together more than two years ago and came up with an idea — students and Garney professionals should join together to install a water transport and distribution system in a needy area of the world.

Not only would the chosen community benefit, but Lipscomb’s students would gain valuable on-the-job skills and Garney employee-owners would have the opportunity to carry out the company’s purpose: “Building sustainable futures with the world’s most precious resources—water and people.”

More than a year later, not even a global pandemic could stop them. Eight students and eight Garney employee-owners traveled to Guatemala in August to finish a water system with a catchment and filtration system, 13,000-gallon holding tank, solar-powered pump and a distribution piping network. A $92,000 gift to the Los Limones residents, said Sherman.

“Throughout the project, we were constantly relating the similarities of this smaller project for the village to the larger projects we construct in the States,” said Seal, Garney’s director of Nashville pipe operations. “We would talk to the students about what a career in the industry looks like. Many students think they have to go to an engineering firm, so we got the chance to show them that the construction side is a big part of that industry too and that there are great careers on the construction side as well.”

Garney Construction, the largest water/wastewater contractor in the U.S., drew senior managers from its offices across the nation to live out what is a deeply held value of the company: the humanitarian value of efficiently providing clean water to the world.

For the first year of the project, Lipscomb students worked on the design of the water system from the Lipscomb campus in Nashville. In January 2021, Seal, Sherman, and Colvett went to Guatemala on a scouting mission. The visit kicked off six months of installation work by the Mayan-run non-profit ADICAY (Asociación Para El Desarrollo Integral Comun Ak’ Yuam).

ADICAY played a vital role in the project, said Sherman, doing all the preliminary work — surveys of the area, implementing legal contracts and community outreach — to pump water from a spring on the other side of a mountain to the village two miles away.

In August 2021, the student/professional team wrapped up the project, digging trenches to lay some of the tougher-to-install pipes, installing the solar panels, and then turning the pumps on and testing the system.

Los Limones residents were also involved in their own project. The men of the village gave up paid work for a time to provide labor for the project. The women of the village often invited team members into their homes for meals or refreshments, and the children “follow all of the team members around throughout the installation, eager to pitch in and learn how it all works,” said Daniela Baugh, the Peugeot Center’s director of operations. “These projects are truly a partnership, not just a gift.”

Because ADICAY projects include educating the community on water system maintenance, Sherman estimates that the system will provide clean water for the community for the next 20-50 years.

The impacts of fresh water on the village are countless, Sherman said. The residents are witnessing fewer intestinal diseases and the health of the population is expected to climb exponentially thanks to the cleanliness of the water.

Without having to make the treacherous journey for water, there are more Los Limones children attending school than ever before. Women were also highly involved in the decision-making process of the water system, and due to their involvement in the process, their status within the community has been elevated. 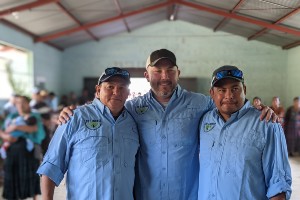 “These communities feel that they can contribute, and in the process, they get the confidence to think of the assets they can provide,” Sherman said. “New projects are generated because they realize they have skills through this process.”

As for Garney, “It makes their work feel valued when they see the excitement of someone who can turn on their water tap. Even though people in America don’t think anything of it, their company realizes this water is blessing cities and people,” said Sherman.

“Doing something like this makes you feel good, and makes a lifelong impact. Everybody was proud to be part of the project,” said Seal, who had no trouble recruiting Garney’s regional managers to participate. “All I had to do was tell them about the opportunity. Community involvement and helping others is a part of our company culture.”

“We are already working on the next project. It is also in Guatemala, in the next village over. On the scouting trip we went over to scout out their preliminary needs,” said Seal. In fact, Garney has contributed $50,000 to the next joint project.

Lipscomb students are now working busily on the design for that village. Many of the students who went on the August trip were juniors, and are now working on this next water system for their senior design project.

Garney and Peugeot are working to send joint groups in March and May to carry out that construction project. “We have a lot of (Garney) employee-owners who want to go now, so we now have an application process,” said Seal, noting that the most prominent U.S. humanitarian engineering organizations tend to target donations from corporations rather than allowing engineers to “get their hands dirty” on the project itself.

“Through Peugeot, we’re able to get directly involved. We like to be hands-on because that’s what our company does. It allows us to not only donate money, but our time as well.”