On Nov 18, German Consul General David Gill spoke at Lipscomb University in commemoration of the 30th anniversary of the fall of the Berlin Wall on Nov 9, 1989. Born in East Germany, Gill experienced first-hand the oppressive communist regime and the eventual peaceful revolution. Denied higher education under the German Democratic Republic, Gill began his career as a plumber but later studied theology and law. He became Consul General in 2017 and now lives in New York with his wife and two children.

Charlie McVey, professor of German and Russian, welcomed guests to the event including Douglas Berry, director of the Nashville Warburg Chapter of the American Council on Germany and Honorary Consul of the Federal Republic of Germany to the State of Tennessee.

Gill shared what life was like in the German Democratic Republic under the oppressive regime of the East German secret police, or STASI. He said as the years went by, change was evident in East Germany and the world. In 1985, Mikhail Gorbachev became General Secretary of the Soviet Union and introduced talk of change and transparency; ideas very different from those of his predecessors. This shift was felt in the Soviet state of East Germany. 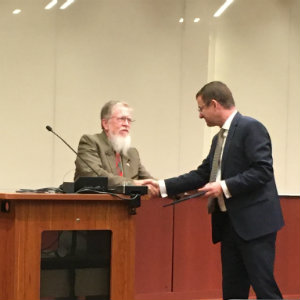 "Little stories came together in the end to paint a big picture,” said Gill.

As the son of a minister, Gill recognized the significant role of churches in what is referred to as the “Revolution of the candles.” He was denied higher education in a state-recognized school, but found free education in the church where he enjoyed the open discussion of ideas -- an uncommon freedom for students in the Soviet Union. He shared that near the end of the decade, churches were the center of movement, offering shelter for activists and hosting Monday Peace Prayers -- weekly gatherings for prayer, song and candle lighting. Gill witnessed these demonstrations grow in number until he was one of the half a million people gathered in Berlin, five days before the fall of the wall. He described the infectious feeling of freedom and happiness that night, as people expressed their desire for basic rights.

"When the wall came down we were all surprised, and then a new chapter started,” said Gill.

Thirty years later, Germany continues to heal. Gill recognized that when a country is ruled by a single party, the social fabric falls apart and takes time to recover. As Consul General, Gill takes seriously his role of communicating the deep history of Germany to the people of the United States, and fostering successful discussions and exchange between the two countries he calls home.