There are several aspects of Lipscomb's Department of Cinematic Arts that set it apart from other film schools. Highlights include a focus on experiential learning, connections to industry professionals, and high-profile events, just to name a few. In January, 13 film students, freshmen through seniors, spent a week in Park City, Utah at the internationally-renowned Sundance Film Festival.

The festival is an annual event hosted by the Sundance Institute, a nonprofit “dedicated to the discovery and development of independent artists and audiences.” Since 1985 the event has become “the ultimate gathering of original storytellers and audiences seeking new voices and fresh perspectives,” according to Sundance.org. The 11-day festival features filmmaker conversations, panel discussions, live music events, and film premiers of all genres.

“It’s America’s most prestigious film festival. We watched a ton of films, many of them will be released in the theaters later on so we were the first ones to see them,” said Dave DeBorde, associate professor of film and creative media.

DeBorde takes students to the festival every year, and has a schedule that includes both festival events and personal networking.

“We rent a big three-story house, and in the mornings I have some filmmaker friends of mine come over and the students cook breakfast. The speaker talks to the students about the film industry and they get to ask questions,” said DeBorde. 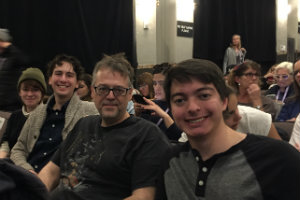 DeBorde brings students to the festival each year to view award-winning films and meet industry professionals.

The students were also given access to some exclusive events, thanks to DeBorde’s connections. This included an annual private industry gathering known as the “Chicago Food Party,” which features 28 pizzas flown in from Chicago. Attendees included financiers, producers, directors, publicists and other industry professionals whom students were encouraged to mingle and network with.

DeBorde also managed to give the group free access to high-profile panel conversations. Panelists discussed an array of topics including entertainment legal, branding, producing, distribution, and tips to launch a career in the film industry.

“Students loved the panels, and I made sure they got connected with some of those speakers,” said DeBorde. “Sundance helps the students learn how to talk to people in the industry.”

In such a high-end environment, students learn of possible job or internship opportunities, and how to act around media and influential people. As a world-famous festival, professionals from all aspects of the industry make an appearance. DeBorde said it’s not unusual to attend sessions and events with famous musicians, movie stars, and other celebrities throughout the week.

The Department of Cinematic Arts provides artists with the skills to be an expert in their chosen field, in a faith-based environment that highlights the global impact of art. Here, students learn from highly accomplished, expert faculty to lead in the industry with innovation and integrity, and actualize creative visions to make a difference. With program offerings in film production, animation, or film and creative media, students graduate as independent, bold entrepreneurs ready to create meaningful content for audiences around the world. To learn more, click here.