Even though the summer months are usually seen as a relaxing time for college students, many Lipscomb University students seek out ways to learn while enjoying the break. Take Sierra Gonzalez for example. This senior environmental and sustainability sciences major from Nashville had the opportunity to conduct research in Panama during June and July.

Gonzalez went to Panama as part of an independent study offered through the Institute for Tropical Ecology and Conservation. She enrolled in a field course called “Tropical Rainforest and Canopy Ecology” where she studied ecological differences in different topography in Panama.

Held in the province of Bocas del Toro Archipelago, the course is a combination of formal lectures, two group research projects and often an independent project, and informal lectures during excursions. Gonzalez and the other students stayed on Isla Colon, one of the many islands the make up Bocas Del Toro Archipelago. While there, Gonzalez boated to different islands within the Archipelago to research the different ecological differences, like species and forest diversity, between the islands and the mainland.

“I really enjoyed comparing the forest biodiversity and structure between two Panama locations,” says Gonzalez, “We also compared the population density of the Oophaga pumilio  (a species of frog) and examined what life is like working in an environment like Bocas Del Toro Archipelago.” 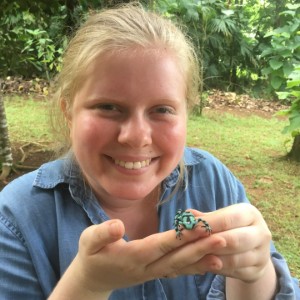 She and the group conducted research on Bird Island, a small island where you will find the only known Carribean nesting place of the Red-billed Tropic Bird, also known as Phaeton aethereus.

“I loved being so close to the rainforest all of the time. After reading and seeing about it in textbooks and documentaries, I finally got to be inside of it. Hearing all of the bird sounds and just being there was so satisfying,” said Gonzalez.

The trip was not only educational, but eye-opening, Gozalez said. Studying in Panama helped her realize she was living in a societal bubble as far as her experience in America.

“The people on the trip were awesome people, but they were very different from me as far as values and ideologies,” says Gonzalez, “It was challenging for me to interpret new ways of life outside of what I know in America, but I’m so glad I did it.”

After graduating, Gonzalez plans on getting her naturalist certificate, a certification that helps you learn about your local ecosystem, how to properly care for it and how to educate others on properly caring for it. After obtaining her certificate, she hopes to use it to facilitate sustainability courses for an academic year while attending graduate school.

As for students interested in studying abroad, Gonzalez thinks it’s an experience everyone should have.

“I encourage anyone who’s even a little interested in studying abroad to go do it,” says Gonzalez. “The experience is valuable, because you get to encounter a different environment, both physically and culturally. You learn so much more about the world, and about yourself.”