Lipscomb's Regional Scholars Program is equipping leaders across Tennessee to make a positive impact in their communities.

For as long as he can remember, Lawrenceburg, Tennessee, has been the center of Ryan Egly’s universe.

The city of just over 10,000 residents is a place that Egly and multiple generations of his family have called home. It is also a place that he, as president and CEO of the Lawrence County Chamber of Commerce, has devoted his career, time and energy to serving. Through his work with the Lawrence County chamber, Egly leads the organization in its main missions of economic development, community development, workforce development and tourism marketing.

“The purpose of our work is to continually find ways to better people. The Regional Scholars Program really seemed like an initiative that would equip me to more effectively serve my community, and I have always had a goal of earning a master’s degree,” says Egly. “I was initially approached about the program by The Ayers Foundation. They are passionate about many of the same things that I am as far as rural revitalization and starting a rural renaissance. I also had some friends who enrolled in the program and had heard very positive feedback from them. As part of the program, I was offered tuition assistance through Lipscomb’s partnership with the Ayers Foundation, and I decided to go for it.”

The network of colleagues and resources across the state that we have developed and learned about through the program is an asset that will have a significant impact on the work I do in Lawrence County. — Ryan Egly

“The Ayers Foundation has been serving Lawrence County for a number of years and I’ve seen the difference it has made in providing direction to students in this area and to help them pursue educational goals,” says Egly. “It's humbling that they would entrust me with this opportunity. I hope through my experience in this graduate program, it will improve my ability to increase opportunities for other students in Lawrence County like the Ayers Foundation does today. This is what it's all about… working together for the common good.”

The Regional Scholars Program is an initiative designed to develop leaders across Tennessee with a particular focus on those from the state’s 70 rural counties as investment in leadership development and education in the state. The Master of Arts degree in leadership and public service was created and designed to train leaders who can serve strong communities by implementing tangible solutions. The first cohort, of which Egly is a member, of regional scholars entered the Master of Arts program in August 2020. They will graduate this December.

The program, which may be completed in one year, facilitates the building of critical skills in leadership, communication and conflict resolution. Courses focus on innovative leadership in rural and statewide settings, data analysis, connecting the community to resources, negotiation and conflict management, working productively in cross-sector settings, communicating to diverse interest groups and budget management among other topics. Students study with and are mentored by top leaders from across Tennessee and through the program develop a statewide support system and network of resources. 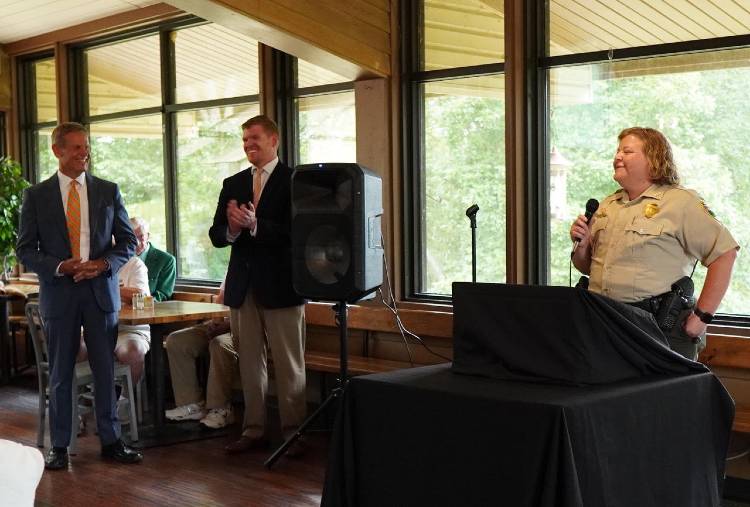 Egly believed the program was a good fit for his passion for public service and for the Lawrence County community.

“One of the reasons I'm so passionate about public service is that in rural communities, specifically, there is often a self worth issue. Just the term rural community often conjures up a negative connotation when you think about economics, or connectivity, or business or other issues,” Egly explains. “And that's not the case… it’s really just another value proposition. So my passion for public service is really a quest to try to change the culture around what it means to be rural and to help people understand that there is opportunity in rural areas.”

For his capstone project, Egly is studying every county in the state of Tennessee, and evaluating them on three indicators: new job creation, metric (such as wage growth, population trends, etc.) and state resources that have been allocated. He is looking at what sets the counties apart — the communities that are falling behind and those that are “wildly successful.”

“At the heart of it is rural business development. I don’t mean tourism and marketing,” explains Egly. “I want to be very specific and hone in on what it means for a rural community to throw off the stereotypes so that people see that it's worth investing in these communities. That students go off to college and they want to return to these communities …  that I can start my business and operate it here.”

From an early age, Egly began learning about the importance of small business in his community. As a 12-year-old Egly began working first at his parents’ convenience store and washing cars at his grandfather's used car lot. He also recalls, in his formative years, the economic impact of a large manufacturer closing in his community.

“Small businesses are the ones that brought that vibrancy back to our community. Small business has always been a part of who I am,” admits Egly. “I know what the value of work ethic has done for me, the perspective that has provided me, the blessing that it has provided me and the ability for me to be generous, whether that's in church or charity. In my work with the chamber I saw an opportunity to link people to resources and help them dream a little bit about what can be.”

I want to be very specific and hone in on what it means for a rural community to throw off the stereotypes so that people see that it's worth investing in these communities. — Ryan Egly

Egly says the program has already benefited him in a number of ways.

“The network of colleagues and resources across the state that we have developed and learned about through the program is an asset that will have a significant impact on the work I do in Lawrence County. Having that connectivity with this cohort and others we have met will be tremendously beneficial moving forward,” he explains. “The program has also helped to broaden my perspective. While I serve a more rural area, discussing issues that face the urban areas in our state provides me a conceptual perspective and also provides an opportunity for all of us to see how those issues impact rural areas.”

Egly says the camaraderie within his cohort is strong. “We lift each other up. We bounce ideas off of each other, and if someone needs help with something, we're there for each other. So we've created like a little family that otherwise we wouldn't have had. I've got friends that I know that I'll call on for the rest of my life now,” he says. “For me that’s one of the best experiences for me, but I have also valued hearing what is going on in other parts of Tennessee. I would recommend this program to anyone who is interested in learning about other communities as well as bettering themselves personally.”

Already, Egly is applying what he is learning on the job. He has facilitated discussions with other organizations by sitting in a circle instead of a more typical “classroom style” with participants facing the front of the room, modeled after his experience in the program. “That alone made the conversation so much better,” he says.

“I've caught myself so many times doing something in the office where whether it's a team setting or I'm facilitating a discussion that I have learned in class,” Egly continues. I've implemented a few nuggets of things we’ve learned and it's made a huge difference in our organization.”

“From the moment I entered the program, I knew it was going to stretch me and that it was going to better me both personally and professionally,” he continues. “We need people who are willing to put in the work to lead. I’ve been a part of multiple leadership programs that are very good — but I don't know of a better program out there than Lipscomb’s Regional Scholars Program. This one has really touched my heart and my mind in ways I didn't know were possible.”