Innovation is everywhere in our communities and in higher education. Imagine 2019 examined lessons in innovation learned by author Walter Isaacson.

More than 800 donors and friends gathered Monday, April 15, for an evening of storytelling by former Aspen Institute CEO, author and journalist Walter Isaacson speak at Lipscomb University’s Imagine 2019 in Allen Arena this evening.

Isaacson, former chairman of CNN and editor of TIME magazine, examined the theme of leadership in innovation.

“Innovation in communities and in business is critical to their viability, success and growth,” said John Lowry, senior vice president for advancement. “Innovative leaders have the ability to look at problems differently and develop solutions that others cannot. They have the vision to continually seek new and different ways to do business, to solve challenges and to create new ways of doing things. They are very valuable to their organizations. Nashville is a thriving city with that is on the leading edge and will be a stronger community with leaders who find creative and innovative ways to impact this community.” 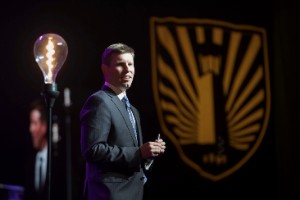 A renowned biographer, Isaacson shared insight and lessons learned about innovation and leadership through his research and writing in a conversation-style presentation with Lipscomb president L. Randolph Lowry. His most recent biography, Leonardo da Vinci (2017), offers new discoveries about Leonardo’s life and work, weaving a narrative that connects his art to his science. He is also the author of Steve Jobs (2011), Einstein: His Life and Universe (2007), Benjamin Franklin: An American Life (2003), and Kissinger: A Biography (1992).

“I’m always trying to tell things in a narrative, storytelling kind of way. That’s the way we convey our values. That’s the way the Bible is written. The best lead sentence ever is ‘In the beginning,’ so you know you’re going to get a narrative account,” said Isaacson.

The main lessons Isaacson said he learned through his study of da Vinci is that innovators must have obsessive playful curiosity and to be passionately observant. He said Benjamin Franklin was “curious about everything you could possibly know” and that while people may have thought he was a doddering old man flying a kite, his electricity experiments were “the most important experiments at that time” that led to tremendous innovation for that time.

Isaacson used Apple founder Steve Jobs as an example of the ultimate innovator.

“Imagination. That was Steve’s mantra. Someone who takes imagination and applies it to technology and turns it into a business. This is something to both celebrate and to understand,” he said. “He stood in the intersection of the liberal arts, technology, beauty, engineering and business transforming everything from retail stores to the music industry to journalism to computers to movies that I wanted to celebrate an imaginative business leader in this book.”

When I look at what makes a creative city — and Nashville is one of the top in the country — I think that creativity and imagination is moving from Silicon Valley and the engineers into real spaces where people apply it to things like the life sciences, music or many other things. — Walter Isaacson 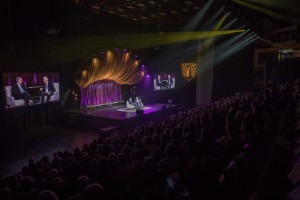 “Ben Franklin to Einstein to Steve Jobs to Leonardo da Vinci to they are people who understood that you have to be at the intersection of the arts and the sciences to be imaginative.”

He believes that Nashville is a place where this intersection is alive and growing.

“When I look at what makes a creative city — and Nashville is one of the top in the country — I think that creativity and imagination is moving from Silicon Valley and the engineers into real spaces where people apply it to things like the life sciences, music or many other things,” he said.

“Cities that have great creativity have great universities,” he continued. “When we look at Nashville’s economy — we have the health sciences and all of that. But another huge industry is education. If you really want to make a town thrive, make its universities thrive. And Nashville has a large number of universities and it is thriving.”

Earlier in the evening, Lipscomb alumnus and entrepreneur Mark Cleveland, shared advice for budding innovators. Cleveland is founder of the innovative ride sharing rewards app Hytch; former CEO of Hobby Lobby and co-founder of Elicit Brands, LLC, a company known for its Swiftwick brand of U.S. produced athletic and medical compression socks. He suggested finding a community and taking a seat at the table; staying focused on problem solving and not getting up from the table; and continuing to believe in the idea and to invite others to the table. 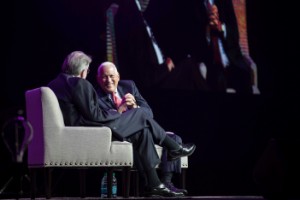 Walter Isaacson, former chairman of CNN and editor of TIME magazine, examined the theme of leadership in innovation.

“I want to invite you to the table, so that’s your seat right there,” said Cleveland. “That empty seat is an opportunity to share in a problem solving… Let’s fill it.”

Musicians Natalie Grant and Wintley Phipps also performed during the event with Phipps leading a soulful rendition of “This Little Light of Mine.” The Lipscomb University men’s basketball team, that made it to the NIT championship game on April 4, was also recognized.

Imagine 2019 is a by-invitation-only event for Lipscomb Associates, donors of $1,000 or more annually. In January, Lipscomb launched LipscombLEADS, a campaign to invest $250 million in the university in the next three years.

“We hope you are inspired to be informed and to leave tonight a better person,” President Lowry told the crowd who gathered for the fourth annual event. 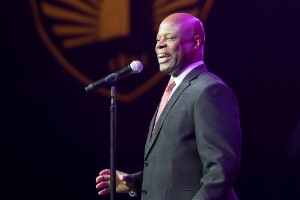 Musician Wintley Phipps ended the evening with a soulful rendition of “This Little Light of Mine.”

In 2016, Lipscomb launched its Imagine initiative to convene conversations of significance that bring leaders from around the world to Nashville to engage the community in topics of local and global importance and to share their stories and unique perspectives. Past speakers and topics include:
President George W. Bush was the featured guest in February 2016 for the inaugural Imagine convening. The topic was  “Nashville: An Emerging City with Global Significance.”

Magic and Cookie Johnson led a discussion of “Nashville” Prosperity for All Corners of the City” in 2017 through which the Lipscomb community examined the ideas of faith, redemption, entrepreneurship and community transformation.
In 2018 author and journalist Tom Brokaw examined the power of telling Nashville’s story.