With music, testimony and Larry the Cucumber, the President’s Convocation officially kicked off the 129th academic year at Lipscomb University.

Students, faculty and staff from Lipscomb Academy and Lipscomb University along with the Lipscomb Board of Trustees, gathered in Allen Arena on Tuesday, Aug. 27, for the traditional President's Convocation to celebrate a new year of learning and growing in relationship with each other and with God. 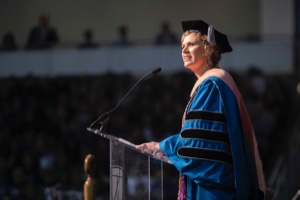 The ceremony began with a parade of flags representing nations reflected in the student bodies of Lipscomb Academy and Lipscomb University. Faculty, dressed in their full academic regalia, filed in during the parade of flags. Convocation also included the traditional bagpipe entrance of the program participants, provided by Nashville Pipe and Drum.

In the academic charge Chelsia Harris, executive director of the School of Nursing, empathized with students over the fear and anxiety that accompanies the start of a school year. She shared the challenges she overcame as the first in her family to attend college, and the lessons she learned while studying for her three nursing degrees. Harris emphasized that the purpose of studying is not to be the bearer of knowledge, but to become someone who uses that knowledge to do great things.

“Don’t think about what to be, but who you want to be and how you want to be remembered when you leave this place and this earth,” said Harris. “Study so that you won’t just learn it, but so you can do it.” 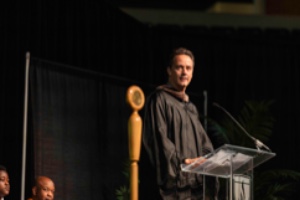 Mike Nawrocki, known for his role and creation of Larry the Cucumber, was introduced as a new faculty member in animation and film. Nawrocki shared that instead of becoming a doctor like he originally intended, he put his plans aside to film the children’s animated series, VeggieTales. Years later, while filming the episode on the Biblical story of Esther, he considered this change in career choice to be his “Esther moment.” Nawrocki encouraged students to be receptive to these hard decisions in their own lives and to look upwards for help.

“Make plans and study hard, but always keep your heart open to God using you for such a time as this,” said Nawrocki.

The presidents of the Student Government Association at Lipscomb Academy and Lipscomb University led the scripture reading and prayer, while musical guest Ellie Holcomb treated everyone to a special performance. Through song and scripture Holcomb encouraged students to rejoice always, despite the challenges of life.

In his closing remarks, President L. Randolph Lowry recalled the words spoken by angels at Jesus’ empty tomb; “Come and see.” He reflected on the recent milestones of the Lipscomb community, through academic accomplishments, missions trips, fundraising efforts and renovations, and the undeniable presence of God in each. 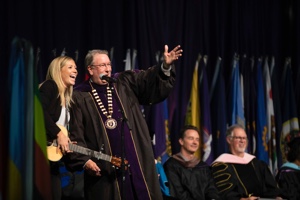