Along with baking and remote work, fitness also became a highly popular activity during the on-and-off lockdowns over the past two years of the pandemic. Sales soared at Peloton, a manufacturer of Internet-connected exercise equipment and purveyor of virtual fitness classes, allowing at-home warriors nationwide to remotely work out and encourage one another as a digital community.

A big part of Peloton’s success is due to positive Peloton instructors like Chase Tucker (’13), a personal trainer and social media influencer, with close to 100,000 followers on Instagram. The Haitian-American kinesiology graduate has been highlighted in the New York Post, Authority Magazine and Thrive Global as a Peloton instructor “who has become his own brand,” according to AdWeek.

He joined Peloton at its flagship studio in Manhattan in 2018 and teaches treadmill, strength and cardio classes. His mantra is that he wants his students to see his classes as something "deeper than just working out".

Tucker’s classes vary in levels of difficulty and target specific areas of the body: arms and abs, glutes and legs, and more. He also teaches audio-only runs and walks, which are available on the Peloton App along with all his other classes.

Raised as an athlete by physicians in Chicago, Tucker entered Lipscomb with an eye on medical school, but soon realized that wasn’t the path for him. He switched his goal to physical therapy. “I came back to school and took an extra year to get back on track with my coursework, and ended up graduating with a kinesiology major and minor in exercise science,” said Tucker.

“Working at a PT clinic, working with athletes, that concept was exciting to me—the idea that I would be… helping them really operate at their best,” he said. “However, upon graduating and working in the field, I realized there was an important piece to fitness that I was missing by working in kinesiology—helping people overcome their barriers, whether it be physically, mentally, emotionally or spiritually. To fill that gap, I went down the path of personal training.” 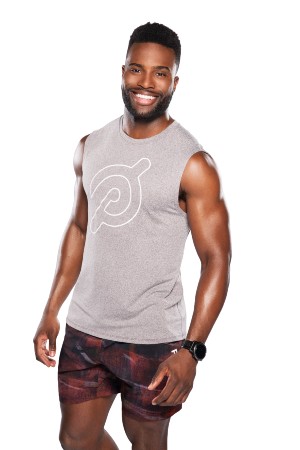 Tucker had plenty of both in-person and online training experience before coming to Peloton in 2018. Upon graduating from Lipscomb and leaving the physical therapy field, Tucker became a fitness instructor at Barry’s Bootcamp in Nashville. He later earned certifications in group fitness and personal training, and eventually started an online fitness company with a couple of colleagues.

That led to him starting his own online fitness coaching business, where he coached business professionals and entrepreneurs. That business drew the attention of Peloton, which was busy establishing its NYC studio for virtual fitness classes.

Tucker says every day working at Peloton is different, and for him the days start at about 3 or 4 a.m.

“I think a lot of people would be surprised to know that, of the people who take a class of mine, the percentage of people who actually show up live with me is very small. The majority of people take it when it's convenient for their schedule,” he said.

“Before Peloton, when I would teach a fitness class, I would put effort into creating the format and orchestrating the music, the program, the energy. Then I taught the class, and after that, it just vanishes. It was fleeting and would never be experienced again,” said Tucker. “That's why at Peloton, it's so impactful that members can tune in even after the time of instruction, to workout with me and come away from that experience feeling better mentally, physically and emotionally. I think my favorite thing about it is that it provides so much more value.

“For the people who do make it onto the livestream, I appreciate the fact that they are there in real time, and we’re all being present together in that moment. We may be separated by a screen, but we are together digitally and are showing up for the same purpose… to always raise the bar and to elevate with a community of like-minded individuals who share the same intent.”

Tucker says he gained a lot of his emphasis on community from his days at Lipscomb. “I didn't stick to one group or clique—that wasn't my thing—but I think the ease with which someone like myself could find a sense of community at Lipscomb was very meaningful,” he said. “I observed it and that sense of community is a core component of my fitness philosophy. Community is the glue that ties it all together. It makes it enjoyable, sustainable, fun and a place to bond in shared experiences.”

Tucker says his studies at Lipscomb provided him with a solid foundation of the basics and fundamentals upon which he has built through his own curiosity, self-study, mentors and other sources of education.

“I am fascinated with how fitness can be used as a gateway to self-development, self-mastery and growth,” he said. “So, as someone who, for much of my life, knows what it's like to feel powerless, like you don't have control and feel like you tend to do things that are outside of your best interest—I hope that by the time someone leaves my class they feel like they've done something that was in their own best interest.

“When someone leaves my class, I hope they do so feeling like there's at least one person out there who really has their best interest at heart,” he said. “...I just hope they feel loved.”