When LeBron Hill was a teenager, attending college was a distant dream.

Survival was all that was on 18-year-old Hill’s mind after his mother kicked him out of their house in Tullahoma, Tennessee.

“I really wasn’t looking at a good situation in my life at that time,” recalled Hill. “I remember my mom telling me that I wasn’t welcome there and that I needed to go somewhere else. I remember not knowing what to do.”

His brother drove him part of the way to a local homeless shelter, but left him on the side of the road after throwing Hill’s bags into a nearby ditch.

A high school senior at the time, Hill was forced to dropout of high school. 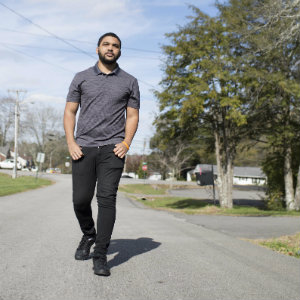 But where Hill’s story seems to come to a dead end, was actually the beginning of another significant story in his life—the pathway to a college education and to making a better life for himself. And now, five years later, Hill is preparing to graduate from Lipscomb University this spring with a degree in communication and is on the way to pursuing a career in journalism.

“That’s really where I remember my story starting was getting those bags out from the ditch and walking up to the shelter,” he said. “I was very depressed and sad about what was happening in my life. But I went up to the shelter and knocked on the door.”

The shelter—the Shepherd’s House in Tullahoma—is a Christian-based environment that provides food, clothing and temporary housing for the homeless as well as hope for the future and help to heal broken lives, said Lori Winningham, president of the organization’s board.

“We try to fill our residents with hope and love so they can see light at the end of their tunnels,” said Winningham.

Moving forward from what he describes as a “chaotic” childhood, Hill saw the time in the shelter as an opportunity to finally focus on himself and what he wanted to make of his life.

“At that point in time, it was a God-send that I could be who I am and do what I wanted to do. I started to realize that my faith was going to play a big role in who I was going to be next,” he said.

Hill got a job at Walmart, and without a driver's license, began riding his bike from the shelter to work and G.E.D. classes. During this time, Hill also got involved with the Wilson Avenue Church of Christ in Tullahoma, whose minister, Randy Davis, befriended Hill. Davis, his wife and their children became family to Hill.

“He had heard a lot of negativity about being trouble, about not being able to achieve or that he would never get anywhere,” said Davis. “But I saw his determination. He never gave up in spite of the obstacles and the hardship.” 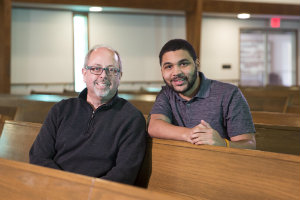 Randy Davis, minister at Wilson Avenue Church of Christ in Tullahoma, and LeBron Hill sit in the pews where the two connected.

Davis would sometimes drive Hill to and from work and to the G.E.D. classes and continued to encourage him. Once Hill passed his G.E.D., Davis encouraged him to enroll in Motlow State Community College in Smyrna, Tennessee, where he could receive an associate degree in mass communication for free through Tennessee Promise. Davis often provided transportation for Hill to get to classes at Motlow State.

“He was so dedicated to me, and I realized that I needed to start a relationship with this guy because he cares a lot about me and about my story,” said Hill. “I knew we were going to be close.”

Hill remembers Davis—whom he later came to call “dad”—telling him that just because he was going to college it wasn’t going to resolve any issues from his past. He said the first two years at Motlow gave him an opportunity to “find out who I really was.”

“When I got the letter that I was going to Motlow, it didn’t hit me at that point that I was going to college because I never, ever thought this was a possibility for me,” Hill said. “At that point I was nervous, because I never studied a day of my life in high school. My first day of classes I was very excited about having an opportunity that I never thought I would have.”

During the first semester, Hill continued to live at Shepherd’s House. The following semester, Hill moved into an apartment and got his driver’s license with the help of Davis. A year later, he earned his associate degree.

“When I graduated from Motlow, I was sitting there crying like a baby thinking of what I accomplished,” he said. “The thing that kept me going was the thought of what I could become and what God had already allowed me to be.”

Davis said they met Lipscomb President L. Randolph Lowry during Summer Celebration while Hill was completing his associate degree at Motlow. Then the following year after Hill graduated, Davis got back in touch with Lowry and the wheels were set in motion for Hill to enroll at Lipscomb University through the Lipscomb Promise program and to begin another important chapter on his journey.

Hill is majoring in communication and has become very involved in campus life at Lipscomb. He works for the student news service, Lumination Network, and is a member of the Collegiate 100. This semester he is an intern at the Nashville Scene.

“LeBron has really made an impact on me and my life and on my classroom,” said Sarah Gibson, assistant professor of communication and academic advisor to Hill. “I think Lipscomb is a better place because of LeBron and what he brings to the table.”

Lipscomb has made an impact on Hill’s life as well.

“Lipscomb has given me the realization that anything is possible,” he said. “I grew up in a very humble beginning. It’s a surreal moment waking up every day realizing that I have come so far. That gives me hope that I can do anything. It allows me to say, ‘look, God loves me and He is able to give me this opportunity.’ And Lipscomb has been able to be that opportunity for me."