The hands and feet of the Lord

Good friends Seth Walker and Ken Brassell went across the Allen Arena stage at Lipscomb’s spring commencement ceremony not individually, but the same way they had walked around campus, to classes and labs and visiting in the student center, for the past two and a half years: together.

The May ceremony was the completion of a journey begun in 2014 when Brassell volunteered to become the hands and feet of Walker, who was born with cerebral palsy.

Walker cannot walk or do any daily tasks of living independently. Even so, Walker wanted to obtain his college degree.

When he was born, Walker wasn’t breathing and didn’t have a heartbeat. Physicians brought him back to life 30 minutes later but as a result of the lack of oxygen to his brain for that time, Walker has cerebral palsy.

“Cerebral palsy affects brain function and is a lifelong condition with no cure,” said Walker, with the assistance of a device strapped onto his forehead and with the help of Brassell. “It can be severe or mild and can affect any area of the brain, from muscle control to speech to cognitive skills. My cerebral palsy is in the middle. It affects my muscles, not allowing them to work correctly, but God has blessed me with a sharp, bright mind.”His parents knew that he would need help to fulfill his dream. They looked to their church for the perfect person to journey from class to class with Walker, assisting him in everyday and college tasks.

God has blessed me with a sharp, bright mind. — Seth Walker

During the family’s search, Brassell was simultaneously praying and asking God to show him what he could do to help others.

“As I was praying, my computer dinged showing I had a notification from my church’s Facebook page,” said Brassell. “The new post was about a family at church, looking for someone to accompany their son to college. God spoke to me and told me I would be the one to help him.”

Brassell admits he was hesitant and a bit anxious about agreeing to accompany Walker to his college classes, because he didn’t have any experience caring for someone with this type of physical challenges.

Although he was hesitant, Brassell said God was persistent in showing him this is what he needed to do, and when he met Walker and his family, Walker was persistent as well, declaring he wanted Brassell to become his college caretaker.

Brassell agreed and the two became fast friends, spending most of the past five years together.

I am his hands, his feet and his voice. — Ken Brassell

Because of his condition, Walker cannot do any traditional everyday tasks, such as feeding, dressing, showering or even scratching an itch himself without assistance.

But he can certainly still learn, ask questions and make friends.

“I am his hands, his feet and his voice. If Seth has a question in class, I raise my hand and ask the question for him.”

After earning his high school diploma (with a 4.0 gpa) from Station Camp High School and an associate degree at Volunteer State Community College, he received a full scholarship to study Bible at Lipscomb.

With Brassell at his side, Walker experienced a college career much like any other. Walker generally took two classes a day. Brassell leaves his house around 6:15 a.m., and Walker’s father drives him to campus, so the two can meet by 8 a.m. Walker usually leaves campus in the afternoon, but ventures to Bennett Campus Center whenever the two have free time.

Brassell is often referred to as the “Seth whisperer,” because after the five years they have spent together, Brassell is able to sense what Walker needs. What started as a request on Facebook has blossomed into a beautiful friendship, for which the two are thankful.

“Seth will probably tell you he is thankful for what I’ve done, but I can tell you I am more thankful that I did it because I think I got more blessings out of it than he did.

“He is one of the finest people I have ever met,” said Brassell. “He is so smart it blows my mind. Seth is the most patient person to be with. If we were all more like Seth, the world would be a better place.”

So it was fitting that the two walked across the stage together in May to receive Seth’s Bachelor of Arts in theology and ministry.

In his president’s charge, Lipscomb President L. Randolph Lowry shared stories of how various students “overcame challenges” on the journey to their degree, but he especially focused on Walker.

“Seth Walker cannot walk. He cannot feed himself. He cannot dress. He cannot roll over in bed without assistance. And yet God has given him an amazing sense of cherishing and holding on to all that life provides,” said Lowry.

Lowry went on to discuss Brassell, saying “For the past five years, he has attended virtually every single class that Seth attended at two colleges.” So Lowry called Brassell up on stage and awarded him his own honorary bachelor’s degree.

“Ken’s spirit and humor is often seen in his treatment of Seth,” said Earl Lavender, professor in the College of Bible. “He challenges Seth, jokes with Seth, and genuinely enjoys his friendship. What sets Ken apart, though, is his gentle care and obvious love for Seth. 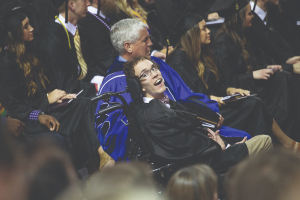 Lavender, one of Walker's professors, and Walker sit together at commencement

“Seth’s college career has not been without severe pain. He has endured several surgeries during his studies, at times in so much pain that Ken walked his wheelchair back and forth during class to alleviate Seth’s intense suffering,” said Lavender.

Walker hoped to continue his education and has been accepted to Southern Baptist Theological Seminary in Louisville, Kentucky. But Brassell and Walker plan to still stay in touch, remaining true friends despite distance and life’s changes.

“When I get to heaven, I will take my first step,” Walker says. “I will be able to run, jump and play basketball. Also, I will be able to speak clearly. My earthly body will pass away and Jesus will give me a glorious new body!

“My focus will totally be on praising my Savior. I will be able to sit at His feet without using a wheelchair! I will then be able to praise Him by jumping for joy and by singing with my new voice. Hallelujah! Who wants to run with me?”