In the United States we love our electronics small, convenient and reliable, and now a Lipscomb University engineering professor has received a $110,000 grant from the National Science Foundation to help continue the development of the next generation of miniaturized electronics and their reliability.

Stephanie Weeden-Wright, professor of practice in electrical and computer engineering, was awarded a National Science Foundation EAGER Grant (Early-concept Grants for Exploratory Research Program) to conduct computer models of electron activity, which translates into operational reliability, for miniature transistors called gate-all-around devices, which are in development throughout the nation.

The grant was titled “Hot Carrier Effects in Novel Miniaturized Gate-All-Around (GAA) Field Effect Transistors” and was awarded for the next year beginning Sept. 1. Weeden’s research specialty focuses on the effects of radiation on the reliability of electronics, 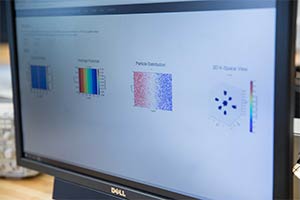 “Companies like Intel and Texas Instruments have scientists dedicated to ensuring their commercial consumer electronics are not affected by our terrestrial radiation environment,” she said.

The demand for smaller, more efficient electronics has driven commercial companies to push the limits of scaling down transistors, and as the size goes down, the likelihood of electronic breakdown and loss of data goes up, Weeden-Wright said.

“We are getting to the point where we can’t get too much smaller in our transistor size,” said Weeden-Wright. “So now engineers are getting creative with the space, like stacking transistors together or developing gate-all-around transistors.”

Gate-all-around field effect transistors allow for even smaller transistor size by adding a metaphorical valve to the flow of electrons into the device, cutting down on their rapid bouncing around like billiard balls, which can cause operational problems. But not much is known yet on the actual reliability of these super-small gate-all-around transistors, Weeden-Wright said.

Engineers often use computer simulations to understand how the electrons move about in the device. Weeden-Wright plans to use a model not applied to this investigation before – a Monte Carlo code – to conduct computer simulations of the electron flow in a gate-all-around transistor. Lipscomb senior and engineering major Hanley Heinsman will help Weeden-Wright run the simulations and help develop classroom curriculum based on the models for Lipscomb’s undergraduate engineering students. 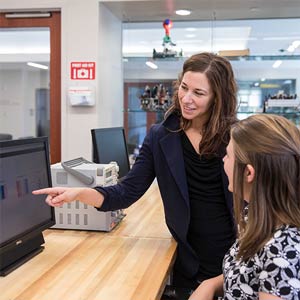 “This work has the potential to impact our understanding of complimentary devices such as LEDs and solar cells, etc., and has implications for the renewable energy industry, resulting in increased access to affordable, reliable and clean energy to consumers around the world,” Weeden-Wright said.

Weeden-Wright holds a dual faculty appointment at Vanderbilt University’s Institute for Space and Defense Electronics, one of the largest university-based research institutes on the subject of radiation effects and reliability in miniaturized innovative circuits. So she will carry out the computer simulation using Vanderbilt’s super-computer. A Vanderbilt graduate student in the Radiation Effects and Reliability group, which Weeden-Wright advises, will also help conduct the computer simulations on the ACRRE computing cluster.

Most computer simulations determine “average” behavior of the electrons, but Weeden-Wright and her students will use the Monte Carlo code, a specific mathematical approach that will allow her simulations to consider the whole distribution of how each electron behaves in the device.

Weeden-Wright received her Bachelors of Science in physics from Seattle University and her Ph.D. from Vanderbilt University where she specialized in radiation hardening of emerging memory technologies. Throughout her graduate tenure she was a visiting research scientist at NASA AMES research center and USC ISI Disruptive Electronics group. Before joining Lipscomb, Weeden-Wright was an instructor at the School for Science and Math at Vanderbilt.

Last year, scientists at the world’s largest and most powerful particle collider, the Large Hadron Collider, in Switzerland, heard from a Weeden-Wright on the latest in miniaturized innovative circuits at their annual conference for CERN, the European Organization for Nuclear Research.