With a goal to become a pilot, Jacob Shankles juggles life as a full-time student and airman in the Air Force Reserve Officer Training Corps

Jacob Shankles, a sophomore math major at Lipscomb University, has always wanted to be a pilot in the United States Air Force. With a long military history in his family, Shankles was inspired by the service of his parents, grandfathers, and ancestors before him. He even had a great-great-great-uncle who died in the trenches of World War One. On his way to achieve his life-long dream, Shankles is one of 50 students in the nation to receive an exclusive Air Force ROTC scholarship.

The life experiences Shankles had growing up in a military family greatly influenced his fascination with airplanes. His father was an enlisted member of the Air Force, and young Shankles would sit in the cockpit of the airplanes at his father’s work and ask endless questions about the features and controls. His grandparent’s house also allowed him a front row seat to aircrafts in action. Shankles remembers one summer visit when he watched the sky in awe as attack planes flew in formation overhead. Later on in high school, he moved to Cambridge, England to live with his dad who was stationed there. The school was uniquely located at the end of a runway for F-15 planes, loud fighter Air Force jets that took off every 15 minutes, every day. Shankles said their engines were so loud classes were forced to pause as they flew away.

“I always sat by the window, my favorite thing was to watch them take off. They’d go straight, pull up, and then just go until you couldn’t see them anymore. I was like, ‘I wanna do that, I wanna do that for sure,’” said Shankles. 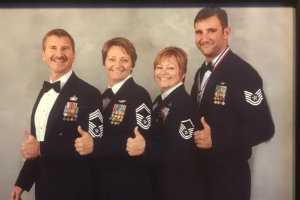 Like Shankles, his uncle, aunt, step-mother and father are part of a long line of family members who have served.

While the Air Force was always his dream, Shankles had to decide whether to enlist, as his parents and grandfathers did, or become an officer. While officers require more training, a college degree and additional schooling, only officers can become pilots. To continue toward his dream job, he enrolled in the Air Force Reserve Officer Training Corps at Tennessee State University for military training -- a commitment he manages on top of being math major at Lipscomb University.

“Only officers can fly and I really want to fly. People don’t understand, but it’s very competitive. My class at ROTC started with 76 people and is now down to five. There are so many different requirements to meet, but I’ve learned to take it one step at a time,” said Shankles.

To become an officer in the Air Force, particularly a pilot, there were many hurdles for Shankles to overcome. The first was the physical his freshmen year, an in-depth examination to ensure prospective airmen are physically able to serve.

“I get anxiety at the doctor’s office, I just don’t like it. I’m getting better with it, but my blood pressure was running high -- too high for the Air Force. I think this was the first instance where God really showed me this was what I’m supposed to do. First semester of college I didn’t know if I would make it in the program, but I passed,” said Shankles.

The next big step was the Air Force Officer Qualifying Test, an eight-hour long exam that acts both as a job placement and assessment of knowledge. While the position of pilot is the end goal, Shankles recognized that less than 1% of the Air Force even flies at all. To prepare for the test he focused exclusively on passing, rather than the information he needed to do well on the vocational section.

“On this test, I never studied the aviation part. I love aviation but I was just focused on passing. I scored in the 98th percentile in America in the pilot section. This was the second part where I felt like God really showed Himself,” said Shankles. 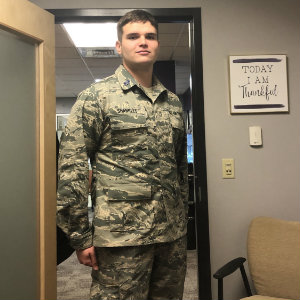 Shankles said once he successfully passed the first two assessments, he stopped doubting in himself. At that time, the officers in his ROTC program recognized his potential as well. On his behalf, they submitted an application for an In-College Commander scholarship with the Air Force. With about 25,000 applicants per year, only 50 students are selected in the country. Shankles is the second person in middle Tennessee to receive this award in the last 20 years.

“None of that makes any sense to me, but that’s where I really feel like God has shown what He can do with average people. I can’t take credit for those kinds of things, it just doesn’t make sense,” said Shankles.

On top of his academic classes as a math major and with ROTC, Shankles also juggles a part-time job and Air Force physical training. He said his professors at Lipscomb have helped him to stay on top of his degree even with his additional responsibilities, and the Veteran Services office on campus has also been very supportive of his dreams.

“I truly believe that no one gets to where they are because of themselves. I know that the things I have accomplished are because of the help I’ve had from other people. The officers I have at ROTC who gave me a good name for scholarships, Veteran Services being there for me on so many occasions, my friends who always hype me up when I wear my uniform on campus, and especially my family with big military history,” said Shankles.

Shankles still has a long way to go to reach his dream of becoming a pilot, but he looks forward to the opportunities he will have with the United States Air Force.

“One of the biggest things that I see is a greater potential for leadership as an Officer. The military is an opportunity to lead in the best capacity that I have. I can’t really explain it, I’ve just always had a passion to serve in the Air Force. The sacrifice of my dad and my grandfathers before me really inspired me to do the same,” said Shankles.

A G.I. Job's top Military Friendly School and one of Military Times' Top 25 Best for Vets Business Schools, Lipscomb University provides soldiers, veterans, and their families with an academically challenging degree program that works with career goals. With about 300 veterans and dependents on campus, Lipscomb Veteran Services understands the dynamic challenge faced by military families.

To learn more about how Lipscomb works with veterans, soldiers, and their families, click here.