This is the third story in a series celebrating Second Chance Month.

At the age of 17, Ashlee Sellars, from Knoxville, Tennessee, found herself in a courtroom being tried as an adult facing a life plus 25-year prison sentence for decisions she made as a minor.

But that moment in Sellars’ journey did not define her. It was the moment that began her on a new journey toward a second chance at life.

As she faced the judge that day, Sellars took a plea agreement in exchange for a reduced sentence of 25 years. She was released from the Tennessee Prison for Women in 2017 after serving more than 21 years. However, she did not wait until her release to begin to rewrite her story.

She received the opportunity to join the Lipscomb LIFE program, an initiative in which inside students, residents of TPW, and outside students, traditional Lipscomb University students, take courses alongside one another at TPW.

“The turning point for me was the Lipscomb LIFE program,” said Sellars. “They were the first people that ever believed in me, listened to me and accepted me. Lipscomb was my beacon of hope and the reason I was able to see the face of God for the first time.”

Before the LIFE program, Sellars said she never remembered having a healthy education or an environment conducive to learning.

“My sophomore, junior and senior years of high school were basically non-existent,” said Sellars. “Even though I received my diploma, I was never very academically involved at school. I didn’t have a safe place to do my homework or parents that were supportive of my education.”

When she began taking courses with the LIFE program, Sellars recalls feeling intimidated and then quickly comforted as she began to interact with professors and outside students.

“The LIFE program was the first time I was able to engage in school and I was amazed by the critical thinking aspect Lipscomb provided,” said Sellars. “The professors didn’t tell you what to think but instead gave you tools so you could come to your own conclusions.”

In March of 2017, Sellars left TPW with an Associate Degree and a passion-filled dream of working in restorative justice for incriminated youth.

After speaking at a Lipscomb chapel service, Sellars met Travis Claybrooks, CEO of the nonprofit organization the Raphah Institute, an organization that aims to empower the community to heal from the effects of trauma through education, advocacy and treatment systems.

“Kathy Evans Sinback told me I needed to go to the gathering to meet Ashlee, so I did,” said Claybrooks. “I already thought the program was brilliant - the underlying notion of a faith community, a university, going into a space where there is perceived brokenness and suffering and then entering that space with a sense of shared humanity - to me that model was amazing and then to see the fruit of that in Ashlee really blew me away.”

In February of 2018, Sellars began working in restorative justice through a partnership between the juvenile court and the Raphah Institute as a restorative justice liaison for system-involved youth. She, also uses her experiences with all the youth, including those housed in detention, to try and prevent situations like hers from reoccurring. 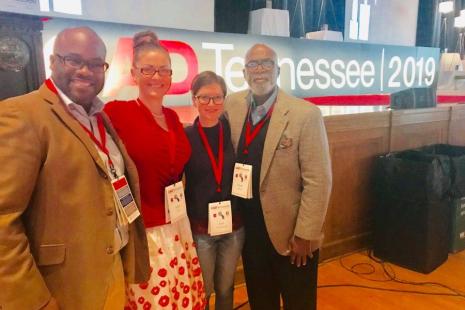 “We are trying to stop youth from going into detention in the first place,” said Sellars. “We look to see what is happening in our communities and how we can relate to the youth. For those that do get arrested, we look to see if we are able to use the restorative justice process rather than the detention process.”

Claybrooks believes that the combination of Sellars’ life experiences and her education prepared her to be “not only the destination, but also the road” that leads to change for troubled youth.

“Her Lipscomb degree is the most significant part of Ashlee’s journey from my perspective,” said Claybrooks. “Not only is Ashlee an example of the change a person can experience, but she has become the mechanism through which others can experience that change.”

Although she obtained her Associate Degree during her time at TPW, Sellars still has high hopes of completing her bachelor’s degree outside of prison to help further her work in restorative justice.

With the dream of completing her bachelor’s degree on hold, Sellars continues to spend hr time advocating for youth that do not have anyone else fighting for them.

“What often happens is that a youth is charged with a crime, they don’t have any accountability, they get put on probation and then they end up violating that probation for non-criminal activity,” said Sellars. “Most of the time the violation is due to their poverty and then the end up back in the system and the circle ultimately leads them to prison.”

“The restorative community conference can change the mindset of the youth charged with the crime,” said Sellars. “They are able to resonate with the person they harmed, to hear what they have to say and feel the impact of their actions. It causes them to go through their lives differently.”

“I am quick to tell the kids that they are the expert, but I tell them I might be able to relate because I have a similar story,” said Sellars. “They learn to take power over this trauma, instead of their trauma having power over them.”

Sellars said that her family is often confused why she continues to give her time and energy to a system that has already taken 21 years of her life, but she explained she wants to help others by sharing her experiences and knowledge.

“If I spent 21 years in the system and then I get out and do nothing with that knowledge, experience and emotion, then I have wasted 21 years of my life,” said Sellars. “ If I get out and use every but of that to help someone else, then everything that happened along my journey, regardless of how painful it was for me, is a benefit for a greater population than myself.”

After she was released, Sellars realized how important her voice is, and she vows to always encourage others to use their voice as well.

“God has told me I need to stand up and speak out about these injustices, and I was not allowed to do that during my incarceration. I will always use my voice now and I will continue to empower others to do the same, even in situations of oppression.”

More about the LIFE program:

The LIFE program, created by Richard Goode, began in 2007 with 15 inside and 15 outside students.

The program allows inside students (residents at TPW) and outside students (traditional Lipscomb students) to participate together in courses at the associates, bachelor and master’s level.

Various Lipscomb faculty members and the outside students travel from Lipscomb’s campus to TPW every Wednesday night as they meet for class with the inside students.

The LIFE program began offering a Master of Arts in Christian Ministry with an emphasis in spiritual care in 2018. Five traditional students travel to TPW every Wednesday to take courses alongside 11 TPW residents as they work toward completion of their four-year master’s degrees together.

There is only one other for-credit higher education program in a U.S. prison that offers master-level courses on-site, according to research by LIFE program director Kate Watkins, and that program does not incorporate interaction with traditional students.

Since the program began, the number of inside students in the LIFE program has grown from 15 to 40 TPW residents taking courses every Wednesday night, working toward associates, bachelor and master’s degrees.

Learn more about the LIFE Program.