One of the nation’s foremost scholars on the Churches of Christ, Richard Hughes, released a new book this year exploring his personal scholarly journey throughout his career, culminating with his most recent insights regarding the intersection of race and Christianity in the U.S. 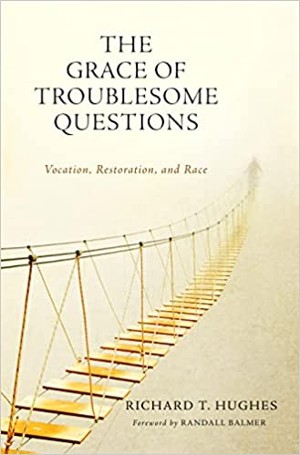 The Grace of Troublesome Questions: Vocation, Restoration and Race, published by Abilene Christian University Press, traces Hughes' sense of vocation—the calling he could not ignore—and how that calling led to a lifetime of research resulting in 17 published books.

Hughes, scholar in residence at Lipscomb since 2015, is best known in Church of Christ circles for his scholarship on the history of the Churches of Christ but is nationally known in other circles for his work on religion and race, religion and higher education, and vocation. He has directed numerous conferences, programs and initiatives related to these topics.

In 2003, Hughes published Myths America Lives By, a critical study of the formation of several foundational ideologies Christian Americans often espouse. He argues that myths—such as the Chosen Nation, the Innocent Nation or the Christian Nation myths—often restrict individuals’ ability to see national issues from another person’s point of view.

Years later, a conversation with James Noel, a professor of African American Christianity and American religion at San Francisco Theological Seminary, made Hughes realize that he had left out the most important myth from his first book: the myth of white supremacy. That notion became the fuel for Hughes to research and write the second edition, Myths America Lives By: White Supremacy and the Stories That Give Us Meaning, published in 2018. He researched the book in part thanks to an institutional research grant from Lipscomb.

Troublesome Questions includes Hughes’ selected lectures, essays and writings that reflect a lifetime of questions involving discipleship, exclusivism and patriotism sparked by growing up in the Church of Christ of the American South.

According to the publisher’s description of the book: “Through personal stories and penetrating analysis, Hughes offers a behind-the-scenes tour of his scholarship, and the clear and compelling vocation that has fueled his life's work.”