Inspired by her goal to help develop new antibacterials to better treat infections and fight resistance to antibiotics, Elizabeth Gibson, from Tate, Georgia, became the second Lipscomb Pharm.D. graduate to complete pathway program and earn her Ph.D. in pharmacology.

At her new position at St. Jude, Gibson works with Dr. Clinton Stewart, using the experience she gained at Lipscomb and Vanderbilt in pharmacokinetics and pharmacodynamics to improve the use of chemotherapy drugs in infants and small children, particularly those with tumors of the central nervous system and other solid malignancies.

This work helps clinicians develop effective therapies and tailor doses of these powerful drugs to fit the disease, the patient and his or her stage of development.

Gibson was first introduced to the idea of pharmaceutical research as a career when she shadowed a hospital pharmacist during high school. The pharmacist’s husband, who worked as a researcher at the CDC, came in that day for lunch, and his description of his job spurred her interest in becoming part of “a deeper way to help people.”

Gibson’s journey to become a pharmaceutical scientist didn’t follow a straight path. Although she knew she wanted to go to pharmacy school, during her undergraduate years at Reinhardt University, in Waleska, Georgia, she had a passion for both music and science.

At the time she graduated high school, she was the pianist/organist for a local church. The church offered her a promotion to music director, which would help her with school expenses, if she continued studying music in her undergraduate work. She became the music director at the church and majored in sacred music, but continued to work with the biology department at Reinhardt to earn all the prerequisites she needed for pharmacy school.

Working on two academic tracks at once wasn’t easy. She graduated with well over the required hours for a bachelor’s degree and often had to practice music four hours a day, she said. 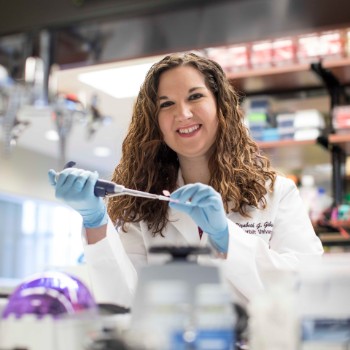 Gibson is the second graduate to move into Vanderbilt's doctoral program through Lipscomb's customized pathway program.

But her zeal to conduct pharmaceutical research stayed strong. She specifically researched universities with Pharm.D.-to-Ph.D. programs and began her studies in pharmacy at Mercer University in Atlanta, but then chose to transfer to Lipscomb in 2011 after her first assigned primary investigator left Mercer.

As Gibson arrived as a transfer in the middle of the academic year, the College of Pharmacy developed a customized plan for her first year, allowing her one-on-one research time with her Lipscomb assigned primary investigator Dr. Joe Deweese. As it was still early in the College of Pharmacy’s development, Gibson worked with Deweese in Lipscomb’s first scientific labs set up in spare spaces throughout the renovated Burton Health Sciences Center.

At Lipscomb, her research focus has been on targeting cancer, the same focus she has now at St. Jude. She began working with Deweese to research the human type II topoisomerase enzymes, which is a cancer drug target. Her hope was to determine the interactions of the metabolites of the commonly used anti-cancer drug etoposide with its enzyme target.

She worked with Deweese in the College of Pharmacy Summer Research Program and during the school year throughout her entire tenure at Lipscomb.

“I was able to get a first author paper and a second author paper published, and I wrote a review article as well by the time I got my Pharm.D.,” Gibson said.

After obtaining her degree in 2015, she was able to switch back to her original passion to research new treatments for drug-resistant infections through her work with Vanderbilt’s Dr. Neil Osheroff, Deweese’s Ph.D. mentor, working on resistant bacterial type II topoisomerases.

After experiencing the devastating consequences of untreatable infections in her own family, Gibson said she wanted “to be on the cutting edge of finding new antibacterials.”

Since moving on to Vanderbilt, Gibson has published two book chapters: one on fluoroquinolone resistance and the other was a methods chapter looking at two-dimensional gel electrophoresis. She also has two first author papers, one looking at Mycobacterium tuberculosis gyrase inhibitors and the other looking at the new class called novel bacterial topoisomerase inhibitors, one of which, gepotidacin, has successfully completed phase II clinical trials for the treatment of uncomplicated gonorrhea.

She also won the Leon Cunningham Award of Excellence in Biochemisty from Vanderbilt and has presented at conferences including the American Society of Microbiology and the American Association of Pharmaceutical Sciences.

“I want to encourage doctors to prescribe better, to find drugs specific for a condition and to make it more affordable,” Gibson said. “Pharmaceutical companies are primarily focusing research on long-term drugs, because profits can be greater for drugs that are taken on a daily basis. Antibiotics are typically taken for 7-10 days. So most of the new research for new antibacterials are small pharmaceutical companies. It’s a niche, but you can make a worldwide impact.

“If my research can make a difference in minimizing resistance to antibiotics, more patients across the globe can be cured from potentially fatal infections.”

Now the research she will be involved in at St. Jude will impact a different population, children with cancer. “Using the unique training I obtained from the Lipscomb University College of Pharmacy Pharm.D.-to Ph.D. Pathway Program, I am able to combine both clinical and research skillsets to improve treatment and outcomes for the pediatric population.”