Gail Humes gets back to nature with beehives in Whites Creek, sells honey products locally

“My husband always likes to give me something special for my birthday. He always tries to think of something different.”

That’s how the School of Nursing’s Associate Professor Gail Humes got into a side business that has been growing sweeter and sweeter over the past three years: she sells her own honey.
That birthday present from her husband was two beehives and some starter bees. Not the normal romantic gesture, but for Humes, who lives on a working farm in Whites Creek,

Tennessee, the gift opened a passion for her that resulted in Humes Honey. 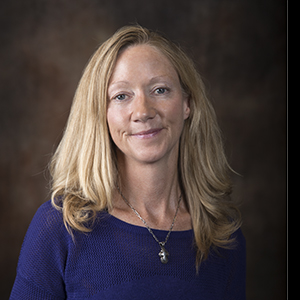 When she’s not in the office preparing the next generation of nurses, she is often working on selling her honey products at the Davidson Farmers Cooperative, flea markets and through personal connections.

Humes wasn’t particularly knowledgeable about bees at first, but after two years with little success at honey production, she went “all in” and began learning everything she could about bees and how to produce the best honey. She learned about how they operate, reproduce and swarm and how they make honey, wax and propolis, a resin that is known for its remarkable ability to fight microbes.

“We're still trying to understand more about just how genius bees are,” Humes said. “They're amazingly smart.” Bees even have facial recognition, Humes said, noting that her bees have been known to check out new people who come around to see the hives.

Humes went from two hives up to 16 hives at one point, but has settled back to the optimum, between 10 and 12 hives each year. Her hard work has paid off as the first year she harvested honey she collected 25 gallons. It was 35 gallons the year after that, and this year brought 55 gallons, she said.

All that honey and wax needed to go someplace, so like any good professor, Humes began researching again and learned how to make lotion bars, beard balm and chapstick as well as the jarred honey itself, which comes in raw honey and whipped honey varieties. She uses wax from her hives and all organic ingredients to make the honey scented lotion bars, bourbon and honey beard balm and vanilla and honey chapstick.

“Once I get down to the hives, I can get lost in them and be down there for hours and not even realize it,” Humes said.

Much like her work as an acute care nurse practitioner, Humes has to check up on the health of her bees every week or so, trying to keep up with their numbers, checking if they are putting up honey, looking for larvae and baby bees, and checking for signs of invaders, such as hive beetles or wax moths, or diseases that can destroy the hives. Sometimes she hunts for the queen, although bees are very good at hiding their queen, she said.

In about March of each year, the queen bee will start to lay brood as more pollen starts coming in, Humes said. By April, there is lots of honey being made to feed all the new baby bees. By the end of April, Humes has to keep an eye on the bees as they may swarm, meaning the queen and a regiment of bees will head out to find a new home, leaving the newly made queen in charge of the old hive.

This year she “caught” two swarms of about 20,000 bees after they swarmed to a new location on her farm on a tree branch. Humes was able to gather them up into new hives and keep them with her existing colony. 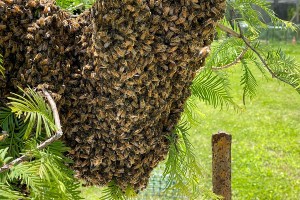 Check out these bees swarming to a tree limb on the Humes farm. Humes was able to collect them and move them back into her hive boxes.

While some beekeepers harvest two times a year, in the summer and fall, Humes only harvests her honey in July, striving to leave some honey for the bees to have during the winter.

Many people are excited to get local honey as the pollens and nectars the bees collect to make honey help boost immunity to allergens. So on her farm, the Humes have planted Echinacea, elderberry, several kinds of clover and blackberries. Others enjoy honey for the probiotics that help their digestion, she said.

Scientists are even exploring the possibility of using propolis, the glue bees make and use to seal up cracks and keep invaders out in wound care, as it has antibacterial properties, she said.
“I think that God has provided us with the tools we need to be healthy, and to even in many cases, remedy an illness. We just have to know how to utilize them,” Humes said.

Humes is actually not allergic, but very sensitive to bee stings. So since taking up the hobby, she has developed her own salve made from bee products and natural ingredients that has been quite successful in eliminating the swelling and pain of frequent bee stings.

This year she produced 650 jars of honey for sale and began making a new product: whipped honey. Whipped honey is a cultured honey that is close to the texture of peanut butter and with a more intense honey flavor. The acculturation process takes her six to eight weeks. Otherwise, the harvesting, extraction and jarring process takes several days in her evenings and weekends to get all the products ready for sale, Humes said.

“I think the bees are really calming, and they remind you of all the ways that God is amazing and that every creation by His hand is perfect,” Humes said of her bee buddies.

During the day, since 2018, she has been busy at Lipscomb teaching nursing courses in medical/surgical care, research and pharmacology. She also teaches in Lipscomb’s online RN to BSN program. Her students get to look forward to Humes Honey products as prizes for excellent academic work, she said. She also carries out physicals of truck drivers for the government’s Federal Motor Carrier Safety Administration.

Humes came to Lipscomb from the faculty of her undergraduate alma mater, Cumberland University. Before that she had professional nursing experience at Nashville’s Centennial Medical Center and Vanderbilt Medical Center in acute care/trauma.

She still has products left from the 2021 harvest including plenty of whipped honey. Email humeshoney@gmail.com for a price list.