As the world marks the 50th anniversary of the moon landing, aerospace expert and dean of Lipscomb's Raymond B. Jones College of Engineering shares thoughts on the impact of engineering on space exploration and why it is still important today.

As Americans are commemorating the 50th anniversary of Apollo 11’s eight-day voyage that included landing on the moon on July 20, 1969, David Elrod, dean of Lipscomb’s Raymond B. Jones College of Engineering has a particular interest in the many documentaries and discussions about the mission and its significance. For nearly four decades, Elrod had his mind on space exploration as a leader and innovator in aerospace technology, and today he is leading the university’s mission to educate the next generation engineers who may take the next historically significant step in space exploration.

Elrod, a 1977 Lipscomb graduate, is an engineer who invested the majority of his career with Jacobs Technology, a global provider of technical, professional, and scientific services, including engineering, architecture, construction, operations and maintenance across the aerospace and defense markets, located in Tullahoma, Tennessee, located about 80 miles southeast of Nashville. 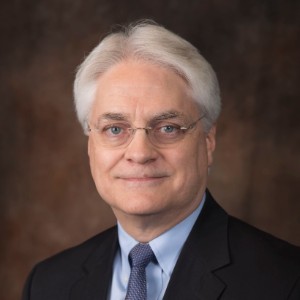 Although his exposure to and involvement in space systems began more than a decade after the moon landing, Elrod worked with a number of individuals who had more direct involvement including engineers and craftsmen who were responsible for testing the rocket motor on the ascent stage of the lunar module. 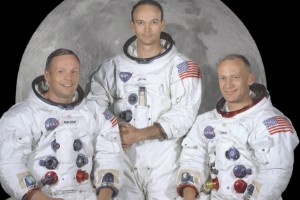 The crew of Apollo 11, from left to right, Neil Armstrong, Michael Collins and Edwin "Buzz" Aldrin.

“As most people know, the Lunar Excursion Module carried the astronauts from the Apollo Command Module to the surface of the moon,” said Elrod. “After their stay on the moon, they depended on the rocket motor on the ascent stage of the LEM to fire successfully, blast off and return them to the command module. The cryo-vacuum environment that motor experienced had been simulated at AEDC and developmental motors had been tested there prior to this historic flight. The engineers and craftsmen knew that if that motor failed to operate, the astronauts would be forever trapped on the surface of the moon.”

“So when the news media reported that Neil Armstrong and Buzz Aldrin had successfully taken off from the surface of the moon, a huge sense of relief was experienced in Tullahoma,” he continued. “That rocket motor was but one of thousands of pieces of hardware that had to work correctly for the flight to occur and is a reminder of how engineering can impact history in amazing ways.”

Enabling Neil Armstrong to set foot on the moon was arguably the most significant technological achievement in human history. For me, the clear and simply stated challenge that President (John F.) Kennedy spoke on May 25, 1961 of sending an American to the moon by the end of the decade had enormous impact. — David Elrod, dean, Raymond B. Jones College of Engineering

“Enabling Neil Armstrong to set foot on the moon was arguably the most significant technological achievement in human history. For me, the clear and simply stated challenge that President (John F.) Kennedy spoke on May 25, 1961 of sending an American to the moon by the end of the decade had enormous impact,” he said.

“With those words, he cast a vision that mobilized our nation in a way never before witnessed outside of war. And it brought about alignment of hundreds of companies and an estimated 400,000 individuals to achieve his goal. Contrasting the accomplishments that can occur when individuals united with the challenges that arise when we choose to divide into our own factions makes me appreciate even more the power and impact of such a vision.”

Space exploration is in full force today with the launch period for NASA’s Mars 2020 rover projected for summer 2020, International Space Station initiatives and the next technology that has not yet been discovered. 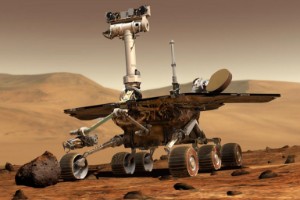 “Space exploration remains important, not because space is our only frontier, but because it is such a rich frontier to explore in terms of depth, breadth and time. While so much of our earth-bound research is focused on current events, the light striking the earth from space informs us about events which appear to have taken place thousands and/or millions of years ago,” explained Elrod.

“With each boundary we cross, such as with leaving that first footprint on the moon, we gain tremendous knowledge that has applicability to many other aspects of our lives. I am a strong believer in exploration in our personal lives, in our spiritual walks, and in our vocational callings.  Through exploration, God’s creation is revealed to us and we see imprints of His work in crossing every frontier.”

The Raymond B. Jones College of Engineering offers programs in civil engineering, electrical and computer engineering, and mechanical engineering — disciplines that are integral to the future of space exploration.

“Each of our engineering disciplines has opportunity to support space exploration,” said Elrod, “Launch systems and space vehicles rely enormously on mechanical engineers to design their structures and systems. Our electrical and computer engineers are deeply involved in the instrumentation, controls, software, communications and ‘smarts’ that enable flight. Civil engineers are involved in arguably the most important parts of safe space flight – the takeoffs and landings.”

“Civil engineers are critical to the design of launchpads, landing strips, processing facilities — such as the Vertical Assembly Building at NASA Kennedy — which are essential for space exploration,” he continued. “Finally, civil engineers are studying regolith, which is the moon’s counterpart to our soil, to understand how it can be used to build structures which can safely house a next generation of astronauts as they continue the journey of exploration.”

Lipscomb engineering graduates have played significant roles in space exploration and continue to be on the front lines of the frontier.

“We equip our students to serve at the forefront of their fields among the brightest, most creative changemakers, and lead their peers with knowledge, innovation, integrity and deep compassion to build a better future,” said Elrod.

Lipscomb alumni who have worked in the aerospace industry include:

Paul Wright, a 2010 mechanical engineering graduate, is involved in renovation of the world’s largest supersonic wind tunnel at the Aerospace Testing Alliance at AEDC, where he has been an engineer since May 2008. Alumnus Chad Jacobs, a mechanical engineer at Jacobs, has been involved in multiple facility design efforts in support of aerospace systems.

Alumni and physics majors Heard Lowry and Wheeler McGregor, were both recognized for lifetimes of contribution to aerospace systems.

McGregor, who went to work for AEDC in 1951, was named an AEDC Fellow in 1990. He was honored for his technical leadership and scientific contributions in advancing state-of-the-art concepts in the area of non-intrusive diagnostic techniques and instrumentation in 2005. He is credited with helping to develop a nationally-recognized infrared signature measurement capability at AEDC and using the rocket test facilities to provide key ultraviolet signature data to the early Strategic Defense Initiative program, which subsequently evolved into the Ballistic Missile Defense Organization and ultimately became the Missile Defense Agency.

McGregor also led the establishment of the Plume Data Center, currently known as the Advanced Missile Signature Center at AEDC, a national repository for plume signature data. He also served on numerous national advisory panels to guide the development of the Joint Army Navy NASA Air Force plume codes. That data is used to plan space and satellite missions and to help determine national missile defense policy and research.

We equip our students to serve at the forefront of their fields among the brightest, most creative changemakers, and lead their peers with knowledge, innovation, integrity and deep compassion to build a better future, — David Elrod, dean, Raymond B. Jones College of Engineering

James Savage, a 2004 mechanical engineering graduate, has worked at Boeing in Huntsville, Alabama, for 15 years. He began his service there as an engineer level 1 then worked as Booster Attach Systems Responsible Engineer for five years. Since 2012, Savage has been a structural and mechanical engineer for the firm. In this role, Savage works in the "Stages" Team of the Space Launch System to design build and fly a Saturn Vclass Manned Launch Vehicle for NASA's Exploration Mission. He is the structural design and stage integration lead and chief engineer for the Exploration Upper Stage project.

Mechanical engineering alumnus David Beaman (’07) has worked as a propulsion engineer at SpaceX for more than a decade. Space Exploration Technologies Corp., doing business as SpaceX, was founded in 2002 to revolutionize space travel and make life multi-planetary – designs, manufactures, tests and launches advanced rockets and spacecraft. As a SpaceX engineer, Beaman, who has a master’s degree in aerospace engineering from UCLA, has worked on a variety of initiatives including analyzing and managing  rocket fluid systems, which includes such tasks as propellant slosh calculations and high-pressure fluid system modeling, and analyzing the thermal systems associated with each rocket and payload from the time of payload encapsulation through payload deployment.

A major focus of Lipscomb’s engineering program is challenging its students and alumni to use their engineering education to help others and for the betterment of society. Since 2004, the engineering college has sponsored 25 volunteer mission teams providing 200 spots for students to carry out ministry support, disaster relief and community development in Honduras, Guatemala and the Dominican Republic. This past summer, engineering faculty and students completed a 104-foot-long pedestrian bridge in San Esteban, Honduras, to connect two schools separated by a very busy highway that elementary and middle school students must cross daily.

Lipscomb’s engineering programs have been ranked one of the best Christian-based programs in Tennessee. It’s undergraduate students are accepted into some of the top graduate schools in the nation from Johns Hopkins to Harvard to UCLA, and are offered jobs and internships by some of the top engineering firms in the country, such as SpaceX, Boeing, Jacobs, Intel, Barge Waggoner Sumner & Cannon, Nissan and Bridgestone.

Learn more about the Lipscomb University Raymond B. Jones College of Engineering.