Mary Nelle Chumley, whose love and support of Lipscomb University began more than 80 years ago, has been named the recipient of the Bill Franklin Volunteer of the Year Award by the Council for Advancement and Support of Education (CASE) District III.

Mary Nelle Chumley, whose love and support of Lipscomb University began more than 80 years ago, has been named the recipient of the Bill Franklin Volunteer of the Year Award by the Council for Advancement and Support of Education (CASE) District III.

Chumley will be recognized during the district’s individual awards ceremony which will be presented virtually this year on May 20.

The Bill Franklin Volunteer of the Year Award recognizes the vital role of volunteers in institutional advancement in CASE District III. One of eight regional CASE districts, District III advances and supports educational and professional institutions in the southeastern U.S. by enhancing the effectiveness of the alumni relations, fundraising, communications, marketing and other advancement professionals who serve them. District III consists of member institutions in Alabama, Florida, Georgia, Kentucky, Mississippi, North Carolina, South Carolina, Tennessee and Virginia.

“I was blown away when I found out I had been selected because I didn’t know I had even been nominated, but I’m so appreciative,” Chumley said. “I’ve been a volunteer for Lipscomb since 1958 for no other reason than to be helpful. I have never dreamed or sought out being recognized like this for simply helping others. I’ve been very fortunate and very blessed to have this long life—and I plan to continue serving others as long as I can.” 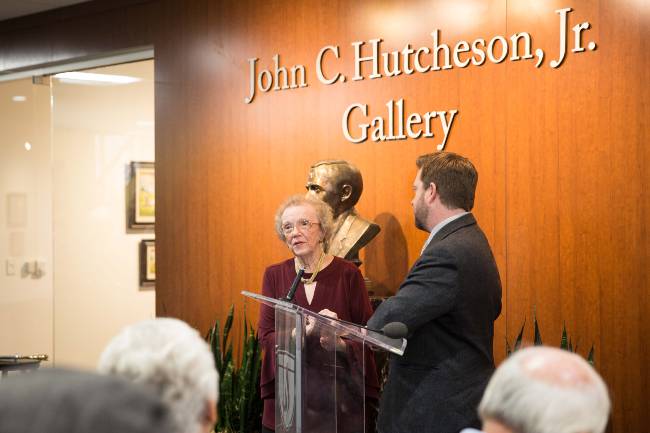 Dedication ceremony for the John C. Hutcheson Jr. Gallery in its new home in Beaman Library in 2018.

Chumley’s relationship with Lipscomb University was planted during her childhood and nurtured during her school years. It blossomed as a young adult and has been in full bloom for her entire adult life.

“Many serve their alma maters well. Some may have more visible roles while others may have more personal resources to invest. No one, in our strongly held opinion, can surpass Mary Nelle’s love for her school, her constant investment of time and energy, and her determination to help advance Lipscomb in all the ways she can imagine or influence,” Stephanie Carroll, assistant vice president for annual giving, alumni and parent engagement, said.

Chumley would say there has never been a time when she has not been part of the Lipscomb community. Her introduction to volunteering for the school, then David Lipscomb College, occurred in childhood when her grandfather was named to the board of trustees. She graduated from Lipscomb’s high school, now Lipscomb Academy, in 1949. It was there she met her future husband John C. Hutcheson Jr., and both attended Lipscomb University as art majors.

Chumley’s unbroken legacy of volunteerism at Lipscomb began when she and her husband returned to the university in 1958 after a period during which he taught in Indiana. In those days at small colleges, faculty had wide-ranging responsibilities beyond the classroom. As art department chair, her husband was responsible for decorating everything from Board meetings to dorm lobbies to Homecoming, and she was in the middle of—or out in front of—these extracurricular assignments. A gifted floral arranger, Chumley quickly became recognized as the campus event decorator. But she contributed far more: for many years, she was the de facto showrunner for homecoming, coaching participants on their roles and managing this and other events.

Following her husband, John’s, untimely death in 1986, Chumley single-handedly created all of the floral arrangements for every on-campus event through the year 2000. She continues to create arrangements for several departments on campus, particularly the School of Music and College of Pharmacy—she volunteers her time to prepare all of the arrangements for its white coat ceremony—and has served the university in this way for five presidential administrations.

As a young faculty spouse, she was concerned that students who could not afford to live on campus would choose not to attend Lipscomb at all. The couple opened their home, just a block away from campus, for many of these students to have a place to live. She saw the impact on and appreciation of these students, and as a founding member of the Associated Women for Lipscomb in the early 1980s, advocated for scholarships to be the central benefit of the nascent organization.

It was Chumley’s idea to use Avalon, university founder David Lipscomb’s historic, on-campus home, as a bed and breakfast or meeting space for campus visitors. Her vision was to use the proceeds to endow the Associated Women for Lipscomb (AWL)-Centennial Scholarship. The administration granted that request and invested in restoring Avalon to its original configuration and modest, country splendor. Chumley began serving as scheduler, host and caterer—roles in which she continues to serve more than 45 years later. She and others volunteered their time in every role — including cooking meals for the visitors — so all of the proceeds would go to the scholarship. A campus publication from 2001 stated more than $23,000 was raised that year alone from activities at Avalon. Today, nearly $414,000 has been generated for the Centennial Scholarship endowment principal. In the past 20 years, more than 600 scholarships have been awarded from the AWL-Centennial Scholarship fund.

The success of the AWL-Centennial Scholarship led them to endow additional scholarships, and satellite AWL chapters also adopted scholarships as their primary focus. In the same 20-year period, a total of 1,627 AWL scholarships have been awarded. Because of their appreciation for her vision and service, AWL established the Associated Women for Lipscomb–Mary Nelle Hutcheson Chumley Endowed Scholarship in 2015.

In recent years, Chumley has immersed herself in serving the university’s alumni relations office, particularly with the Lifelong Learning and senior alumni programs. She is described as “a third staff member” and “a life saver” by the professionals in those programs. She is happy to do the “small things” that have a big impact in constituent services, such as meticulously reproducing yearbook photos of 50-year class reunion attendees, setting up registration areas, greeting guests, coordinating events, and general office work. 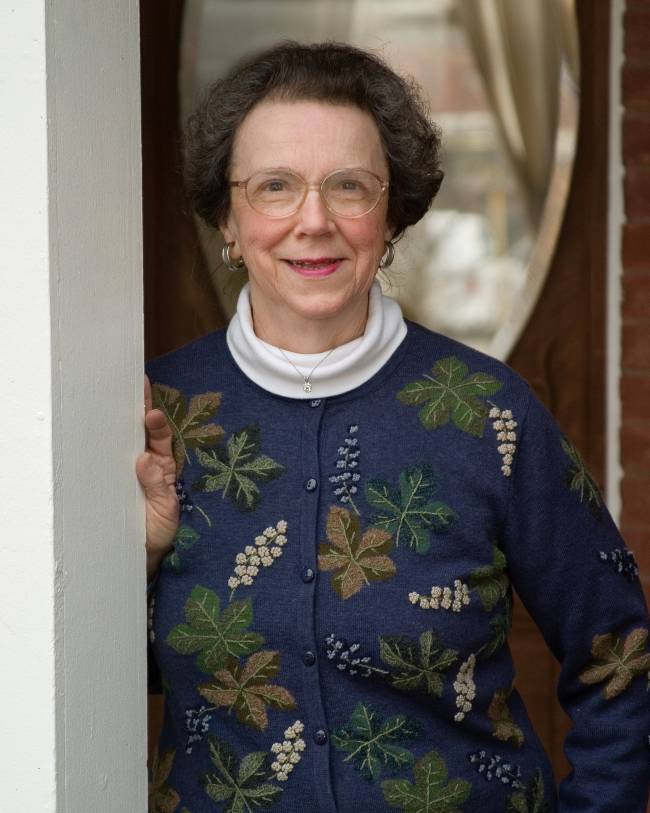 “If she’s not visible, attendees immediately want to know where she is and how she’s doing,” Amy Hamar (’81), director of Lifelong Learning and senior alumni programs, said. “She gives her heart to the people we serve, and they, in turn, give her theirs. People love her!”

Chumley also has consulted with the George Shinn College for Entertainment & the Arts on an art gallery that was established in memory of John Hutcheson, and with Lipscomb Academy’s lower school on an early childhood education program. She is a member of the Lifelong Learning advisory board. Her financial generosity ranks her as a member of the university’s Legacy Society, which recognizes lifetime giving of $100,000 or more.

When the Covid-19 pandemic affected the usual way of life last spring, Chumley adapted without hesitation. Carroll said Chumley “pivoted like the rest of us” when Covid-19 disrupted their normal alumni relations, homecoming and Lifelong Learning plans for the year.

Chumley embraced technology, became an active user on Facebook so she could keep in touch with her throng of friends and even adopted wearing an Apple iWatch so she could remain connected,” Carroll said. “In September, Mary Nelle conducted a ‘walking tour’ of her home flower garden via Facebook live for the Alumni Association’s Facebook page.

“When she turned 91 last year, we posted a ‘Happy Birthday, Mary Nelle!’ greeting, and it became one of our most top-engaged posts—nearly 800 engagements!” she said. “Mary Nelle is definitely a treasure within the Lipscomb community.”

Chumley with Michael Shane Neal at the James D. Hughes Center groundbreaking in 2009.

Lipscomb is not the only beneficiary of Chumley’s volunteer work. Neighborhood children are invited to her house every year for Halloween for homemade goodies and treats. She has taught art classes at a nearby community college.

Through her church, Green Hills Church of Christ, she helped start a “Monday Meals” program in the 1990s, through which she and others continue to help provide meals for approximately 60 shut-ins each week. She also helps provide meals for those who have lost family members or have been in the hospital. She helped start a youth church camp in 1996 at age 67 and cooked for the camp each year until she was well into her late 80s. She works tirelessly with the church’s Warm Coats from Warm Hearts program, has taught a cradle roll class since 1984 and has taught adult women’s classes for many years. She coordinates the “Grantimers” senior adult program. Displaying a heart for true service, Chumley gets to church early so she can sweep the entrances and do other things that make for the most welcoming experience.

“Mary Nelle has been recognized in a number of ways through the years by Lipscomb. A member of the Lipscomb Board of Trustees donated $100,000 anonymously to name the lobby of a residence hall in her honor. The university recognized her as its Alumnus of the Year in 2006,” Carroll said. “These local recognitions are well-deserved but akin to ‘preaching to the choir.’

“We know her, we cherish who she is and all she has done – and still does, even at age 92 – for Lipscomb,” she said. “We’re thrilled for the opportunity CASE has provided to further recognize and celebrate Mary Nelle for her love and dedication to our Lipscomb community.”