Rachel Stewart’s positive reaction to job loss has been viewed more than a million times on LinkedIn.

Like most recent graduates, Rachel Stewart (’19) found herself out of a job shortly after the pandemic came to American shores. Upon returning home, however, she pivoted to a new direction and her recent positive, heartfelt LinkedIn post about what she is learning from the experience has garnered more than 1 million views and more than 1,000 comments.

“I get looks of confusion when my coworkers find out I’m not a nursing student but a graphic designer,” Stewart wrote in early July about her current job as a care assistant at Craigwiel Gardens long-term care facility. “My answer is this little lady right here.”
And then she posted a photo of herself with her grandmother, Adele Stewart, who turns 95 this month and suffers from dementia.

“No one was hiring graphic designers. So I took this job, not in my field, in the midst of a global pandemic so I could hug my grandma (I’m the only person in my family that can do that right now),” Stewart wrote. “I took this job to help instead of just sitting at home feeling bad for my displaced, unemployed self.”

“I am not just a graphic designer. I’m a human being who loves to create but also care for others.” 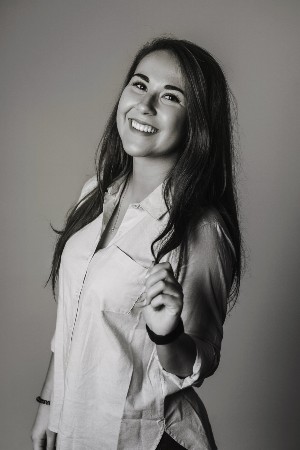 Stewart’s post resulted in a groundswell of positive feedback, with commenters sharing encouragement, similar stories of their own experience and even job offers.

“I can’t even get through all the messages. I am getting thousands of notifications,” Stewart said in July. “The coolest part is the people who reach out and say they are going through something similar. They say, ‘I’m out of a job, and you have encouraged me to look outside my field.’”

Upon graduation in May 2019, Stewart who is from London, Ontario, started an 11-month internship as a graphic designer in a Nashville agency. But the internship ended early when COVID-19 hit and due to insurance and visa issues, she had to return home to Ontario.

“It was a hard transition to move back from the States and to move in with my parents. Canada has been taking the quarantine seriously, so it had been almost two months since I left the house when I went to interview for the job at the end of April.”

Stewart had worked at Craigwiel Gardens in a life enrichment student position while she was studying at Lipscomb. Because of the self-isolation required for employees who may be even possibly sick, the facility is always understaffed, Stewart said. So they reached out to her to see if she was interested in working as a personal support worker assistant. She carries out small tasks that do not require nursing training, such as helping residents put on their shoes or making their beds.

Adele Stewart has been living at the facility for about three years.

“My grandma was a huge factor (in my decision),” Stewart said. “I moved to another country to go to school. I lived there five years, and then everything I knew overnight went upside down. I didn’t get to say goodbye to any of my friends there.

“Coming back to Canada and realizing that things were getting worse, not better, I felt really bad for myself. It tested my faith a bit. Getting the internship was totally a God thing, then all of a sudden, I couldn’t continue to grow. I felt like I took 100 steps backward.

"The news started talking a lot about long-term care and how it was hurting their residents the most. I started thinking about how my grandma can’t have visitors. Their hearts are breaking (from loneliness).

“If someone asks me, ‘What did you do during the pandemic?’ I didn’t want to say, ‘I sat at home because I couldn’t find a job in my field.’ I wanted to be able to say, ‘I was being useful and helpful.’”