At Lipscomb part of the educational experience is learning from leaders from across the country and around the world that expands the borders of learning.

With nearly 75 million women comprising almost 47 percent of the nation’s workforce according to the U.S. Department of Labor, the conversation about gender differences in the workplace and women in leadership is growing as those numbers are projected to continue to climb over the next few years.

Former Google and Facebook executive Marissa Orr, who spent 15 years working at the tech giants, is intrigued by leadership, gender and teamwork. In June, Orr shared her views and perspective in her first book, Lean Out: The Truth About Women, Power & the Workplace (HarperCollins). On Oct. 1, the Lipscomb community has a unique opportunity to hear Orr discuss her experiences and lessons learned throughout her career. The seminar and book signing begins at 7 p.m. in the George Shinn Center. Admission is free.

Based in part on “The Nature of Compelling Women,” a popular lecture series she launched while at Google, Orr calls for an overhaul of the business world’s paradigm of what constitutes a successful leaders in today’s day and age with a particular focus on women. Sponsored in part by Women In Business in Lipscomb University’s College of Business, it is a discussion from which all students — male and female — may learn.

“It is important to have a discussion about women in power and in the workplace for multiple reasons,” said Marcy Binkley, instructor in accounting. “Primarily, as faculty, our responsibility is to prepare our students for the realities of the workplace. Gender differences is one of those realities. Secondly, this discussion is just as much for any man to better understand what a woman is up against professionally in hopes that he can do his part to empower the women in his life.”

Binkley said the lesson she hopes students will gain from their time with Orr is to think outside the box of modern feminist rhetoric or, as Orr would call it, to challenge the belief that women have to be the same as men in order to be equal. 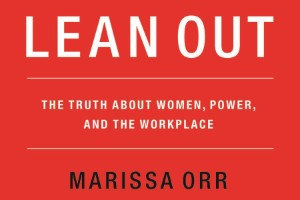 “This discussion will help our students think independently about what ‘equality’ in the workplace should mean,” said Binkley. “It is a tool to encourage critical thinking at large, teaching them to not blindly accept historical assumptions.”

In Lean Out, Orr is not simply countering Sheryl Sandberg’s Lean In premise, which she believes is based on a male worldview. Rather, Orr’s vision is a revolutionary path forward that has the power to change the lives of men and women in the corporate world and beyond. She suggests instead of listening to the voices of hierarchy telling women why they need to be more like men to succeed, finding ways to better value the talent that women already bring to the table.

Binkley noted that women face unique opportunities and challenges in the workplace according to Sandberg’s Lean In. Some of these include:

“The uniqueness of what Orr brings to the conversation is a questioning of the underlying assumptions as to WHY these challenges exist and a contrasting recommendation for how to right the ship,” said Binkley, who teaches a Women in Business course at Lipscomb.

Binkley said she believes it is important for students to hear from leaders such as Orr and others as part of the learning process.

“I believe equipping our female students with appropriate posturing for success throughout their career, knowing first hand some of the obstacles they are likely to face because of their gender, is just as important as any coursework or academic achievement,” said Binkley. “It is my hope that this empowerment and insight will enable them to best live out the mission of the College of Business after they leave Lipscomb; becoming purposeful, bold, credible, creative and servant leaders in their fields.”