Eden Melles awarded many national opportunities to excel in academia

Eden Melles (’20) is an honors student; a lifelong learner; and a high achiever who jumps at every opportunity as it comes. Each time she takes advantage of an opportunity, a new door seems to open up to her ultimate goal: a Ph.D. in political science.

As a junior political science major from Tallahassee, Florida, Melles spent time in 2019 in South Africa as part of a summer fellowship program that advocates for equity in education. Then in November of that year, she won a scholarship to become the student representative for Tennessee at the annual World Affairs Council National Conference in Washington, D.C.

In 2020, the opportunities continued as she was selected as a fellow to attend the Moore Undergraduates Research Apprenticeship Program (MURAP) at the University of North Carolina Chapel Hill.

That summer program, a sneak peek into advanced academia specifically designed for students who plan to pursue a Ph.D. in the social sciences, helped Melles, then a rising senior, solidify her post-graduation plans.

In December, those plans came two steps closer to reality as Melles graduated with her B.A. in political science and was awarded the American Political Science Association Diversity Fellowship, a $4,000 award presented to only 12 to 14 students in the nation each fall.

“As a fall recipient, she is one of a very few who are given this honor on the basis of planning for being a Ph.D. student (as opposed to those recipients already accepted in doctoral programs),” said Marc Schwerdt, chair of the Department of History, Politics and Philosophy. “Eden’s undergraduate accomplishments are several and worthy of praise. We in political science, HPP and the College of Liberal Arts & Sciences are very proud of Eden.”

Melles has applied to seven graduate schools and would be delighted to be accepted into any program, she said. She plans to center her future academic work on social movements and the political behavior of underrepresented communities.

Melles’ family is from the northeastern African country of Eritrea, so her perceptions of Africa were centered around her time spent visiting her family in that specific region, she said. Those perceptions changed during her 2019 trip to South Africa with Equity in Education, a nonprofit organization which focuses on global education and the historical inequities that disproportionately affect students of color or from low income households.

The goal of the Equity in Education fellowship program was to create innovative policy solutions to fix such inequities while introducing the students to research procedures and the culture of South Africa. This trip allowed Melles to witness a culture different from that she was familiar with.

“It was really neat, even as a native, to see how similar and different people from the same continent as me are,” said Melles. “My family is from a pretty homogeneous country, but South Africa is home to a lot of different ethnicities, as well as 11 official languages.”

“This experience helped connect me with awesome faculty from places like Harvard (University) who really invested in me and mentored me, and also friends who I still talk to now,” she said. 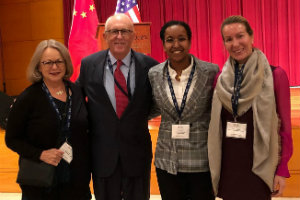 Melles was the second Lipscomb student ever to be selected to attend the World Affairs Councils of America, the annual conference of a bipartisan nonprofit that promotes international awareness and dialogue on the role of the United States in the world. With more than 90 WACA councils across the country, each state nominates one student to compete for 25 sponsored trips to the conference.

To build on these experiences, Melles applied, and was selected, for MURAP a ten-week summer introductory program to higher academia. MURAP’s goal is to increase the number of higher education roles held by individuals from underrepresented minority groups as well as those with a commitment to diversity.

The 2020 MURAP session, conducted entirely via Zoom, focused on creating an environment that is more conducive to improved racial and ethnic relations, both on and off campus.

“Over the last few years I’ve really been considering pursuing a Ph.D., and as a social science student there aren’t a lot of opportunities to explore research or get acquainted with what the process may entail. When I found out about MURAP, I was interested because it was a paid opportunity for me to really learn more about what grad school is like, and it gave me an opportunity to simulate some of the work I will do in the future,” said Melles.

Melles was in a cohort with 19 other college students from across the country and paired with a faculty mentor. She took courses in communications, graduate professional development, writing and GRE preparation, all while working on an independent research project.

With guidance from her mentor, Melles used data from a national survey of nonprofits to determine which organizational characteristics were indicators of successful applications and acceptance of government grants.

Other projects she took on while at Lipscomb included, collecting data and constructing a community profile for a Department of Justice-funded grant that helped develop a community-based diversion court in one of the most highly incarcerated zip codes in the country.

Throughout her college career, Melles said her professors at Lipscomb, such as William Turner, Schwerdt and Susan Haynes, were always available to offer insight and encouragement. Their genuine interest in her growth as a student meant a great deal to Melles, she said.