Tennessee First Lady Crissy Haslam has been named the 2018 Innovator in Education by Lipscomb University’s College of Education for her work in encouraging parent engagement in education and reading proficiency for children.

Haslam was honored at a special breakfast at the Country Music Hall of Fame on Oct. 30. At the event, Haslam received a biography of her life illustrated by children across Tennessee. Since 2011 when her husband, Bill, was elected to his first term as governor, Haslam has focused on her priorities in education and reading and has delivered this message through the First Lady’s READ20 Book Club, encouraging families to read together for 20 minutes each day. 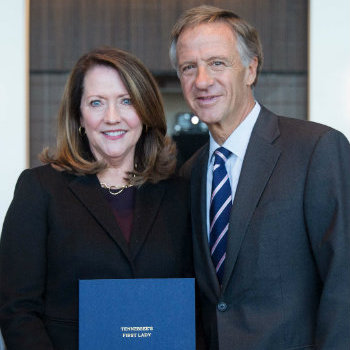 “Literacy I believe is just a foundational issue. It is a big mountain to climb but we are climbing it together,” said Haslam. “There are so many ways to be involved, and people across Tennessee are involved. It’s so encouraging, and I am thankful. There is not a silver bullet for this. This is an effort that has to become entrenched at all levels in our society. It has been such an honor to serve in this role the last eight years. I’ve learned a lot, and I love to learn. So that has made it fun. I could not be more proud of our state. We have seen so much progress, but there is a lot more to do.

“I believe all children can learn,” she continued. “I believe that all children deserve a chance at success in school and in life. And my hope is that children in Tennessee will have that chance. Thank you so much for this honor."

Haslam has a unique understanding of the importance of learning to read early in life, Lipscomb University President L. Randolph Lowry.

“As we think about all of the contributions Crissy Haslam has made in Tennessee, we celebrate the passion and enthusiasm she has brought to a moment in the lives of young people that is absolutely critical moment,” said Lowry. “As I think about the idea of literacy and reading and I think about what she has done to enhance that in the state, I recognize that there is a sense of her understanding that in order to read to learn one has to learn to read. That only happens in those early years of life. She has helped us understand that’s a critical time and if it doesn’t get done then it may never get done.”

Haslam frequently travels the state with the Governor’s Books From Birth Foundation in support of Tennessee’s Imagination Library, as well as lending her voice to the Tennessee Department of Education’s Read to Be Ready literacy campaign.

She also created the READ20 Book Patrol, a partnership with police and sheriff’s offices across the state to provide books to children in low-income communities and to encourage reading and support for local law enforcement. Most recently Haslam has become a champion of several other children’s causes in the state, including the TNFosters campaign and Building Strong Brains: The Tennessee ACEs Initiative. 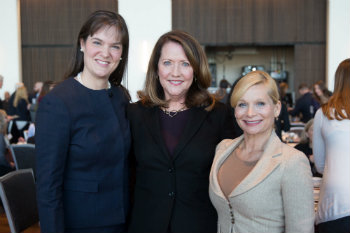 “Leaders have the sense of not having the ability to sit back and watch the world go wrong,” said Bill Haslam. “Crissy has that gene – that’s a problem and that’s not right. She doesn’t have the ability to sit back and say that’s someone else’s problem. And one of the reasons this award is so appropriate is that Crissy truly believes in the power of education. She knows the value and power of education. She understands that there are a lot of people if they don’t have the opportunity to get an education, they’re not going to have the same opportunity in life that so many of us have.”

Lipscomb’s Innovator in Education series and award, created by the College of Education, recognizes leaders who have transformed education working from a foundation of Christian faith. Those honored through this program share their stories with current and aspiring educators to better equip them to serve others through education and to positively impact the world. Past recipients include Janet Ayers, president of The Ayers Foundation, and Candice McQueen, Tennessee commissioner of education.