Every engineering student and professional knows that engineering is not an easy major. So imagine the difficult task of taking on the study of engineering in another nation, without a social support system and having to adapt to an unknown culture.

The Raymond B. Jones College of Engineering currently has 10 international students who have taken on that task, and the college, the university and sometimes even alumni and local community members work together to provide the support system that such students often need to thrive.

Ben Musoni, a senior mechanical engineering major from Rwanda, is an example of such a student. Not only is he receiving a top-notch engineering education from Lipscomb, but he has benefitted from the support structure developed through Lipscomb’s Office of Intercultural Development and a chance meeting in his homeland that brought him a new family in Nashville.

Musoni came to the United States “for a distinguished college education and for better opportunities in the engineering field. The wide variety of opportunities is what’s captivating,” he said. 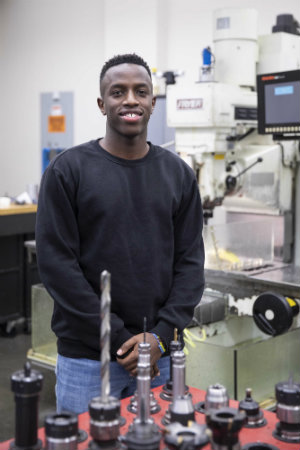 The idea of creation – from start to finish – is what drew Musoni to the field of engineering. “Just being able to think of an idea, design it and put it into effect is what allures me,” he said. “But better yet, seeing what you’ve modeled helping other people do their jobs faster or to live better is fulfilling.”

Thanks to a chance meeting in Rwanda, Musoni was lucky enough to come to Lipscomb with a built-in Nashville connection.

Tim Lavender (’99), who entered Lipscomb as a pre-engineering major but graduated in math, and his wife Emily (’03), a Lipscomb Bible alumna and former Lipscomb employee, and their children traveled to Rwanda in 2018 to support a local humanitarian organization and for their adopted son Thomas to see his homeland.

The first morning the Lavenders were in Kigali, they attended a church service, and Emily was seated next to Evelyn, a woman who would serve as her translator. It turned out that Evelyn was Ben Musoni’s mother, and she shared that her son was at that time in the process of transferring to Lipscomb to study engineering.

When the Lavenders returned to Brentwood, Tennessee, they contacted Musoni to bring him a personal message from his mother and invited him over for a meal.

These days, Musoni frequently eats at the Lavenders on Sundays and bunks in their bonus room during Thanksgiving and other holiday breaks. The young Lavender boys enjoy serious competition with him on the back yard basketball court, and the Lavender’s daughter Mary insisted that Musoni attend her four-year-old birthday party.

In return, Musoni helps Thomas understand more about Rwanda. He plans to teach Thomas to prepare the traditional East African flat bread, chapati. Genuine affection flows as the Lavender children climb on and cling to Musoni as he walks in their door.

Having the Lavenders as a new family has been “amazing,” said Musoni, “especially since they have been to my country. They can relate to my culture and my people. It’s like my second home and I feel loved there.”

The Lavenders have even introduced Musoni to their neighbors, many of whom have contributed to reduce the gap between tuition and his scholarship and loans.

“Every difficulty I have had in school or financially, they try their best to collaborate with me and find the best solution. Being able to live with their kids reminds me a lot about growing up with my siblings. It has given me a place of belonging.”

During his studies, Musoni has participated in the college’s ballistic rocket team and the American Society of Mechanical Engineers.

“The professors are helpful with school work and relating our course work to the real world as much as they can,” Musoni said of Lipscomb. “I have also been able to get opportunities for an internship which has increased my experience.

“The Lavenders' support of Ben exemplifies the family atmosphere at Lipscomb,” said Megan Davis, the college’s director of professional development who has worked with Musoni. “This university, the students and the alumni, care for each other as Christ cares for us, unconditionally and with open arms.  No one is a stranger.”

There are many international students who could benefit from the support of Lipscomb alumni and their families, particularly those who live in Middle Tennessee, said Davis.

In addition to opening their home to an international student, alumni have the opportunity to mentor students through The Joshua Project, a campuswide spiritual mentoring program or can volunteer to conduct mock interviews with engineering students preparing to enter the working world, she said.

It’s the kind of genuine support provided by the Lavenders that helps international students thrive in college in America, whether it comes from a local family or their own friends at Lipscomb, said Laia Jones, Lipscomb’s principal designated school official for the Student Exchange Visitor Program.

“The entire student life office works to make international students feel like Lipscomb is their home away from home,” said Jones. “A strong social support structure helps students acclimate and develop the skills they need to live independently on their own.”

This past fall, the Office of Intercultural Development held a month of engaging activities for international students to learn about Lipscomb, the U.S. visa process, the city of Nashville and about each other, Jones said. Many of the students had a chance to connect with other international students and develop bonds that may last for many years to come, she said.

“It was hard at first, being away from my family and friends, but it made me more independent,” Musoni said. “I had to adapt to my new environment and learn how to make things work for myself. It also made me appreciate my family (in Rwanda) even more, especially as I’m not receiving their daily support and affection (in person).

“I thank God to have met (the Lavenders) because they treat me like family. They are compassionate and welcoming to everyone which is something that has rubbed off on me and impacted my personality.”

Raymond B. Jones College of Engn