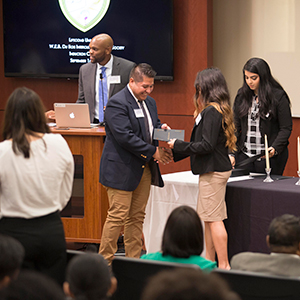 A student becomes part of IHS during a special induction.

IHS also provides incentives to maintain scholarships and encourage others to take the same steps. Faculty and staff interact with students from all academic disciplines and cultivate them.

As an IHS member, you'll engage with community leaders in Nashville, enjoy group outings and leadership training. Engage in several hours of service work and you'll earn SALT service hours. It's not required, but there is also a great opportunity to take part in a SALT capstone project. If you choose to do so, when you finish you'll be a SALT Scholar.

William Edward Burghardt Du Bois, known as W.E.B. Du Bois, was born on February 23, 1868, in Great Barrington, Massachusetts.  Du Bois grew up in a in a mostly European American community and experienced little racism as a child.

He identified himself as "mulatto," but freely attended school with whites and was enthusiastically supported in his academic studies by his white teachers. In 1885, he moved to Nashville, Tennessee, to attend Fisk University, paying his way with money from summer jobs, scholarships and loans from friends.  It was there that he first encountered Jim Crow laws. For the first time, he began analyzing the deep troubles of American racism. After earning his bachelor's degree at Fisk, Du Bois entered Harvard University.

A year later, Du Bois published his landmark study, The Philadelphia Negro, marking the beginning of his expansive writing career. In the study, he coined the phrase "the talented tenth," a term that described the likelihood of one in 10 black men becoming leaders of their race. While working as a professor at Atlanta University, Du Bois rose to national prominence when he very publicly opposed Booker T. Washington's "Atlanta Compromise," an agreement that asserted that vocational education for blacks was more valuable to them than social advantages like higher education or political office. Du Bois fought what he believed was an inferior strategy and became the spokesperson for full and equal rights in every realm of a person's life.

In 1903, he published his seminal work, The Souls of Black Folk, a collection of 14 essays. In the years following, he adamantly opposed the idea of biological white superiority and vocally supported women's rights. In 1909, he co-founded the National Association for the Advancement of Colored People (NAACP) and served as the editor of the association's monthly magazine, The Crisis.