Music City, Sports City. From sport clubs to professional teams, you’re sure to find a fun-loving, competitive community at your doorstep — and a team to cheer on year-round.

Between the ticket giveaways from our Student Activities board and massive championship watch parties on campus, you’ll be in the thick of it. But in addition to Nashville’s four, you’ll have 17 more teams to cheer on: that’s how many NCAA Division 1 sports Lipscomb plays, consistently garnering national attention. Horns up! 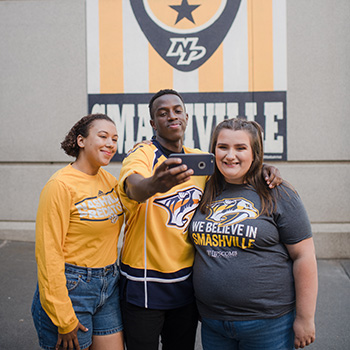 Students with football fever can catch NFL action at Nissan Stadium. The Tennessee Titans are part of the American Football Conference South division.

Welcome to Smashville. Get your fang fingers ready! Living here means you’ll be able to join the raucous Predators fans in cheering on Music City’s ice hockey team in Bridgestone Arena. The Predators are members of the central division of the NHL’s Western Conference.

Head over to First Tennessee Park and enjoy America’s pastime. The Nashville Sounds are a Minor League Baseball team (Pacific Coast League) and AAA-affiliate of the Texas Rangers. The Sounds have three league titles under their belt.

Yes, Nashville is a soccer city, too. Nashville Soccer Club made its debut in the United Soccer League in 2018. Join The Roadies and support your new soccer club.

This former NASCAR racetrack is the oldest continually operating motorsport track in the U.S. The ARCA Racing Series takes place here, as does the All American 400.

Cheer on or (if you’re a woman 18 or older) join Music City’s flat track roller derby team. Founded in 2006, this nonprofit team is a member of the Women’s Flat Track Derby Association.

Whether you have experience or not, this USA Rugby team welcomes new members.

Learn to row, develop your rowing skills or compete with other Nashville-area rowers.

Try something new: Gaelic sports such as hurling, camogie or Gaelic football provide a great opportunity to have fun and stay in shape.