A whole world for you to explore.

Nashville is steeped in history, brimming with culture and bursting with hometown pride. From electrifying professional sports to an endless stream of live entertainment, there's a lot to be excited about. And even over the course of four years, you'll constantly find new corners of the city to explore—a cozy coffeeshop, a buzzing music venue or a state park on the outskirts of town. In Nashville, you're in the middle of everywhere. 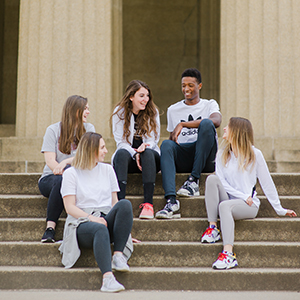 A visit to Nashvegas/Honky Tonk Highway on Lower Broadway to the Cumberland is one everyone in Nashville must experience — at least once. Be prepared for lots of live music, bright lights and people.

In Nashville’s SoBro, all things country music come to a head. A visit to the magnificent Country Music Hall of Fame and Museum is a must. Be prepared for live music, bachelorette parties, and a beautiful view once you reach the river.

Many record labels (Sony, Warner, BMI, etc.) and big names in music own offices here — and they’re in houses. You can even stop by Sun Record Company and see where Elvis and Johnny Cash made music.

Iroquois Steeplechase has been Nashville's rite of spring since 1941. If you love fashion, horse racing and the great outdoors, then you’re in for a treat.

Whether it’s Prince’s, Hattie B’s, Pepperfire, Bolton’s or Party Fowl, you should try it (please start with level one).

Nashville’s premier urban park is the perfect place to study, exercise, play or paint. The Parthenon will catch your eyes as soon as you arrive.

Walking over this Cumberland River pedestrian bridge — and taking pictures of the iconic Nashville skyline — never gets old.

Battle of the Boulevard

You won’t want to miss this legendary basketball game and its storied past with our rival at the other end of the Boulevard. Join in the annual Running of the Bison the night before, and arrive at Allen Arena in your best purple and gold to cheer on your Bisons.

Thanks to Nashville's eclectic and diverse culture, there are bound to be quite a few of these that you won't want to miss.

Every June, this legendary country music festival hosts over 50,000 fans from around the world. With free concerts in addition to ticketed ones, fun events and a decked-out Broadway, you’ll have plenty of opportunities to enjoy this very Nashville experience.

Shakespeare in the Park

The Nashville Shakespeare Festival hosts productions in Nashville and Franklin every August and September. Established in 1988, Shakespeare in the Park offers family-friendly professional productions of Shakespeare’s plays. Admission is free, but donations are suggested.

Every September, the Americana Music Association hosts this ticketed musical festival and conference. (The music genre Americana is created by the shared traditions that make up the music of America, specifically folk, country, blues, rhythm, blues, rock and roll, gospel, etc.)

Live on the Green

Free concerts presented by Lightning 100 in August and September at Public Square Park.

In Nashville, one in six residents is foreign-born. Learn more about the culture neighboring you during this free special festival held every year in Centennial Park.

Every spring and fall, this Nashville tradition of celebrating American handmade craft takes place in Centennial Park. There’s fine artwork straight from juried, award-winning artists who you can meet and learn from.

Ascend into bibliophile heaven every fall for the Southern Festival of Books, with events taking place at Legislative Plaza in downtown Nashville.

Every October you’ll have the chance to enjoy German cuisine, parades, music, dancing, tours of historic Church of the Assumption and more.

Dance, shop, eat and more during the Nashville Greek Festival.

Celebrate Italian heritage with a festival and street fair in the Downtown Nashville Bicentennial Mall.

Admire contemporary craft and fine art in Centennial Park. This festival has been part of the Nashville art community since 1971.

The Williamson County Heritage Foundation presents the Main Street Festival in Franklin for a weekend every spring. Along with the juried arts and crafts show comes the battle of the bands competition and food vendors galore.

Dickens of a Christmas

Dickens of a Christmas is an experience that Charles Dickens fans won’t want to miss. There will be dancers, musicians and characters filling the streets of Franklin’s historic downtown — and even snow.