This week as thousands of people from around the world come to Nashville to celebrate country music at CMA Fest 2019, two former Lipscomb students and rising stars Thomas Rhett and Kelsea Ballerini will be busy filming segments for ABC’s broadcast of the festival in August.

This year marks the third year Rhett and Ballerini have been paired to navigate viewers through the CMA Fest highlights as hosts of the show. This is the fourth year overall for Rhett to host. Taping for the show will happen June 6-9 at Nissan Stadium during CMA Fest.

Rhett attended Lipscomb from 2008-11 and studied organizational communication. While a Lipscomb student he was a member of Tau Phi social club and often performed at the Tau Phi Cowboy Show. 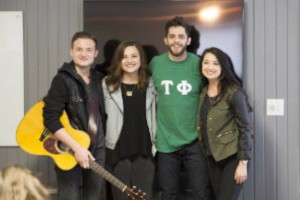 Thomas Rhett was part of Tau Phi social club when he was a Lipscomb student.

Ballerini, a singer/songwriter with Black River Entertainment, studied communication at Lipscomb University from 2011-13. While a student, Ballerini was a leader of Lipscomb’s freshman orientation program Quest, a host in Singarama and often performed in the Tau Phi Cowboy Show and other musical events on campus.

This past April, Ballerini was inducted as the newest and youngest current member of the Grand Ole Opry. Just four short years before that she released her first album The First Time in 2015, and her second album Unapologetically was released on November 3, 2017. She received a nomination for Best New Artist at the 2017 Grammy Awards. In 2015, Ballerini was named a rising star by Billboard Women in Music and the following year she was named New Female Vocalist of the Year at the ACM Awards. In 2017, she won Country Favorite Artist and Country Favorite Song for “Peter Pan” at the Radio Disney Music Awards, Best New Country Artist at the iHeart Radio Music Awards and the Gene Weed Milestone Award at the ACM Awards. Last year, Ballerini won Country Favorite Artist at the Radio Disney Music Awards. In February, Ballerini received her second Grammy nomination. Her album Unapologetically was nominated for Best Country Album.

CMA Fest begins Thursday and runs through Sunday. The three-hour CMA Fest broadcast is set to air on ABC on Aug. 4.