The gray day and chilly weather did not dampen the spirits of several hundred members of the Lipscomb community who gathered Monday afternoon, Dec. 3, to celebrate a milestone in the construction of the new George Shinn Event Center.

Monday’s topping out ceremony was a traditional celebration to mark the final beam being placed atop the structure of the George Shinn Event Center, a 33,000-square-foot facility located adjacent to the Ezell Center that will provide new performance, education and community engagement opportunities for the George Shinn College of Entertainment & the Arts. The cost of the project, designed by Tuck-Hinton Architects, is estimated to be $10 to $11 million with an anticipated opening in the summer 2019.

Before the traditional “signing of the beam” that takes place prior to the beam being carefully installed in its permanent position in the structure, the Lipscomb community gathered in the Ezell Center’s Sanders-Baxter Hall to celebrate the moment. 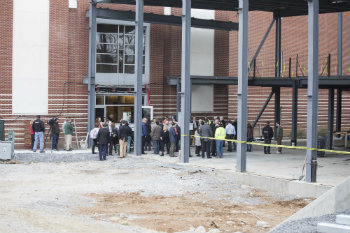 The Lipscomb community gathered outside the Ezell Center to sign the beam to be placed in the structure of the George Shinn Event Center.

“Being a dean is a very exciting job … you get to work with a lot of great people and watch students grow and develop their craft. And sometimes there are moments that are just extra special and this is one of those moments,” said Mike Fernandez, dean, George Shinn College of Entertainment & the Arts. “We are so thankful for everyone who has helped us get to this moment.”

The new facility is designed to house a grand, two-story lobby, a large patio area that may also be used for a variety of events, and a state-of-the-art event hall that can seat up to 1,000 people and be used for a variety of functions including music concerts, theatrical events, art exhibits as well as receptions, class lectures, corporate events and dinners. In addition to the community, the facility will also have a strong impact on students as they will have additional state-of-the-art resources to enhance what they are learning in the classroom. It will also include collaborative classrooms and studio space; a cinematic editing and viewing studio; a welcome center for the university and the administrative home of the CEA as well as a film production studio and a CG animation studio.

Founded in fall 2014, the George Shinn College of Entertainment & the Arts is the fastest-growing of Lipscomb University’s ten colleges with more than 400 students majoring in programs offered by the college.

“Four years ago when we founded this college we had two mainline goals – to become a premiere, 21st century, Christian arts training ground,” said Fernandez. “Each of those words were carefully selected for what they mean. We also want to be an arts hub for the Nashville community. I’m happy to say that after four short years we are achieving both of those goals. It’s an amazing time to be here, and I’m so thankful for that.” 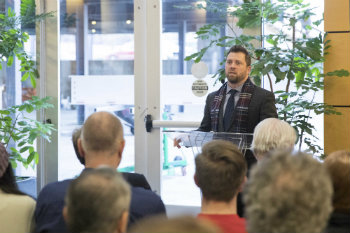 Mike Fernandez, dean of the George Shinn College of Entertainment & the Arts, shares the vision of the college at the ceremony.

“We have met those goals and now we are asking ourselves, ‘What’s next?’” he continued. “This exciting building that we are building here is the next step for an exciting college. We are planning for how we best utilize this to take us to the next level.”

Fernandez shared the vision for the future of the CEA with those gathered to share in the celebration. He announced that future plans for the new facility include the creation of CEA Studios, where faculty, staff and students will create a variety of content to deliver to the marketplace, and the launch of the Creativity Center, which will serve as an arts research hub for interdisciplinary and industry collaborations.

The George Shinn Event Center is funded by a gift made to Lipscomb University last year by George Shinn, former owner of the Charlotte/New Orleans Hornets. The $15 million gift from Shinn was an investment in Lipscomb University’s College of Entertainment & the Arts, which includes construction of the event center.

“I want to make sure where I place my monies will be used to serve God,” said Shinn at the ceremony. “This is truly a Christian university. I’m honored to be a part of this because of the institution that Lipscomb is and how faith is walked out here.” 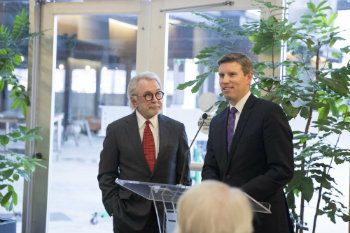 George Shinn, left, and John Lowry, senior vice president for advancement, at the topping out ceremony.

John Lowry, senior vice president for advancement, recognized Shinn’s generosity and the example he sets for others.

“George, we appreciate the resources you’ve made available to carry out the dreams that are being constructed here in front of us,” said Lowry. “More significantly than that we appreciate the model you are giving all of us in this room in taking what God has given you and putting it to work in a way that will benefit others and will honor Him. All of us and students for many years to come will be beneficiaries of this gift.”

Daves Highway, the Mississippi-based trio composed of senior commercial music student’s Delaney, Zachary and Erika Daves, performed at the event. On Monday, they released their rendition of “Have Yourself a Merry Little Christmas,” which they performed for the crowd.

“It is the role of the president to be involved in moments like these where people are making substantial commitments to an institution,” said Lipscomb President L. Randolph Lowry. “I am so grateful to George and his tremendous support of Lipscomb. A university is always the recipient of those who claim it, and those who claim this story and this mission and for you students all of you work and all of your futures. We are humbled today that we have those who invest heavily in it, those who see the future as we do and those who, long after they are gone, will still be having an effect on those who are growing into their professional lives.”

Steve Taylor, director of Lipscomb’s School of Theatre and Cinematics Arts, made remarks on behalf of the college’s faculty.

“I want to thank Dr. Lowry and the board for their tremendous investment in our College of Entertainment & the Arts. I want to thank George Shinn for his incredibly generous gift to our college and to the advancement of storytelling as an art form,” said Taylor.