Life of a servant: Neika Brewer Stephens, a Lipscomb legacy

Neika Brewer Stephens, now in her second 12-year term as a Lipscomb University Board of Trustee, has a passion for Lipscomb Academy and is deeply rooted within the Lipscomb family. 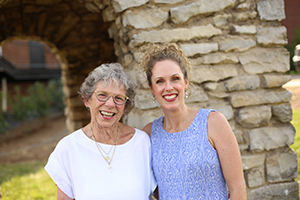 Neika Brewer Stephens, now in her second 12-year term as a Lipscomb University Board of Trustee, has a passion for Lipscomb Academy and is deeply rooted within the Lipscomb family. Many times throughout the year, she is seen visiting on the campuses of both the Upper and Lower schools, as well as cheering on the Mustangs at various sporting events. She is actively engaged with the school administrators, faculty, staff and students. Modeling the characteristics she witnessed from generations of her ancestors, she is living the life of a servant, giving of herself to help Lipscomb Academy excel.

Rarely ever since the 1891 inaugural year of Nashville Bible School, now known as Lipscomb University, has a member of the Ward/Brewer family not been on campus. J. R. Ward, Stephens’ great-grandfather and a contemporary of David Lipscomb, signed the original documents founding the school and was one of five men to sign a lease for the original first buildings of the school. Dr. J. S. Ward, Stephens’ grandfather, was named the third superintendent of the school in 1905 and also served the school as interim president on two occasions.

Robbie Dearing Ward, Stephens’ mother, holds the unique distinction in Lipscomb’s 128-year history of being the first student to complete her entire education at Nashville Bible School, making her the first Lipscomb Lifer. 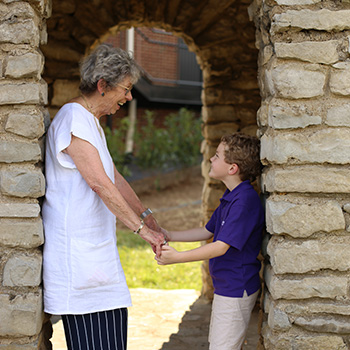 A talented linguist, Charles R. Brewer, Stephens’ father, was a teacher at David Lipscomb College where he taught Greek, Hebrew, French and German, as well as English and Bible. His love of language was most evident in the naming of his only daughter, the youngest of his seven children and the first girl. In the Greek language, “Neika” means “Victory.”

Stephens herself was a student at David Lipscomb in the 1940s. Four buildings that were part of the campus then are still in use: Harding Hall, Sewell Hall, Elam Hall and Avalon. She vividly recalls the colorful teachers that kept students engaged and made learning intriguing, in particular, her father. She still enjoys spending time with her high school classmates from over 65 years ago.

“My dad was such a loving and endearing person. In class, at times, he would stand on his desk to the amusement of his students. His room was full of clocks that were set to different times so as to keep students awake if his teaching couldn’t,” stated Stephens with a chuckle. “My favorite school-related memory of him, though, was how he fully invested himself in the lives of his students. He knew each student’s personality so well that he created a nickname for everyone in his classes and gave them an individual identity to show his connection to them,” continued Stephens.

To honor her father’s dedication as a passionate teacher, the Class of 1935 planned and executed a project to build a permanent tower for the Lipscomb bell in Charles R. Brewer’s honor. Constructed from the rock fence on the Lipscomb farm, the tower was named the Brewer Tower and still stands today outside of Elam Hall.

Because of his wife’s love of Lipscomb Academy, in 2011 Bill Stephens made a $10 million pledge for enhancing the facilities of the Lower School. That campus bears his wife’s family name.

When asked what Stephens loves the most about Lipscomb Academy, she instantly drew upon the connections that teachers have for their students. “There is no better place for your education, then or now. The teachers are dedicated to serving the Lord and loving all students. That love and respect are evident through how they teach as there is a genuine atmosphere of care, concern, love and support for one another,” stated Stephens. “I love the fact that Lipscomb Academy honors God first. And that honor extends to all His creation and every facet, every relationship of life.”

When asked her favorite scripture, Stephens responded, “There are so many but in regard to Lipscomb Academy, and especially the Brewer Campus, it would have to be Mark 10:14, where Jesus said, ‘Let the little children come to me, and do not hinder them, for the kingdom of God belongs to such as these.’”