With the vision to establish a comprehensive development soccer program for both middle and high school student-athletes, Lipscomb Academy announces that Ryan Bouch, former British semi-professional soccer player and coach, has been named to the newly created position director of soccer. Currently, Bouch leads the varsity boys’ soccer team as head coach.

“Lipscomb Academy is excited to have Ryan as part of our athletics team. When he joined our soccer program last fall, we knew that his expertise would help build upon the infrastructure that our soccer coaches have worked hard to have in place. Going forward, the soccer program will be stronger and more competitive as all our coaches work together under his leadership,” stated Michelle York, associate head of school for athletics.

In his new role, in addition to head coach, he will implement a training program with the emphasis on skill development at all ages for both the boys’ and girls’ teams. This new program begins with providing middle school student-athletes with a solid foundation of the fundamentals of soccer. By preparing them with basic soccer skills knowledge and increased training opportunities at an earlier age, as these athletes graduate to the varsity team, they will be better groomed and conditioned for playing competitive varsity teams.

“I’ve worked tirelessly as an athlete over the years and know what it takes as an individual to compete at the elite level. Now I have the same desire, passion and tenacity to coach and build a program that will stand the test of time at Lipscomb Academy,” stated Bouch.

To boost awareness of the academy’s program, multiple initiatives will be executed during this academic year. To heighten community engagement and to encourage the enrollment of new soccer student-athletes at Lipscomb, Bouch is tasked with forming relationships with premier local soccer clubs and increasing the number of tournaments played at the Griffith Family Soccer Field and Complex. Leveraging his former semi-professional career, he will explore opportunities to partner with Nashville Soccer Club, Nashville’s own Major League Soccer team. 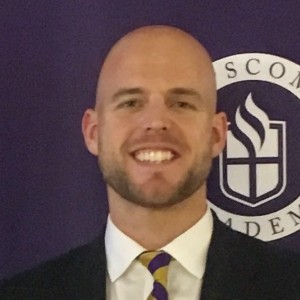 “I have one goal -- to create the best soccer program in the Nashville area for our students to succeed both on and off the field,” said Bouch.

Coaching and community relations are not Bouch’s only goals. He also wants to focus on a comprehensive spiritual formation program for soccer student-athletes as he knows that the character of a man weighs more than his athletic ability. As their coach, he invests in their lives so as to understand them as individuals first.

“Coaches are so instrumental in the lives of athletes. If you take the time to get to know your players wholeheartedly, then you are telling them with your actions that you truly care about them off the field where real-life relationships matter,” stated Bouch.

Bouch, hired as Lipscomb’s varsity boys’ soccer coach in September 2018, began playing soccer at an early age in Cambridge, England. While in middle and high school, he participated in trials for West Ham and Norwich City Football Clubs, professional teams that provided contracts to youth development programs. Upon graduating from high school, Bouch played in the Cambridge City youth soccer system followed by semi-professional stints for New Market Town and Bishop Stortford Football Clubs, as well as for Debden and Sewards End’s men’s Cambridgeshire league. After ending his career as a player, Bouch coached 13 and under and 16 and under soccer teams in the United Kingdom. He moved to Nashville in 2015 where he met his wife Kaitlyn. Bouch and Kaitlyn have a four-month-old daughter. 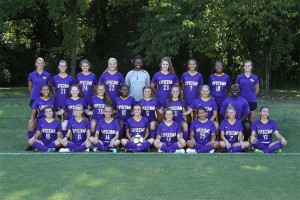 Amber Spragg, back row left, is the head coach of the girls' soccer team.

Continuing as the high school girls’ soccer coach, Amber Spragg, a former D1 soccer player for Brown University, has coached at Lipscomb Academy for four years. She is involved with the Nashville Coaching Coalition and participated in the 2018 Coaches Leadership Academy fall class. Her coaching strengths coupled with Bouch’s semi-professional expertise have Lipscomb Academy positioned to be an extraordinary soccer program.

“Amber has been an exemplary coach and model for our girls’ soccer program. She is an asset to our team, and under her tutelage, two students have signed with their prospective colleges to play soccer,” said York. Bouch added, “Amber brings much joy to the field. I admire the faith-driven person that she is and how she invests in her players.”

The Griffith Family Soccer Field and Complex, dedicated in April 2013, were made possible through a generous donation from Pam and Jim Griffith, Lipscomb University board of trustees member. The complex includes a competition soccer field with lighting, a practice field and home and visitor locker rooms.